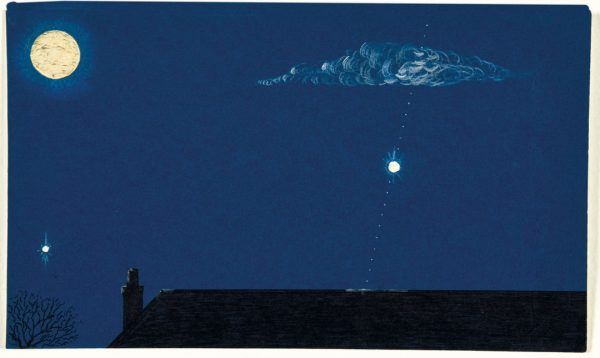 Between 1962 and 2009, the British Government’s Ministry of Defence (MoD) had a UFO desk and telephone hotline that collected around 11,000 cryptic sightings from across the United Kingdom. The files are now accessible to the public, and among the reports on flying saucers and inexplicable lights in the night sky are drawings that attempt to describe their fleeting forms. As part of its new Four Corners Irregular series on modern British visual culture, Four Corners Books has published selections of this alien art in UFO Drawings From The National Archives by David Clarke. 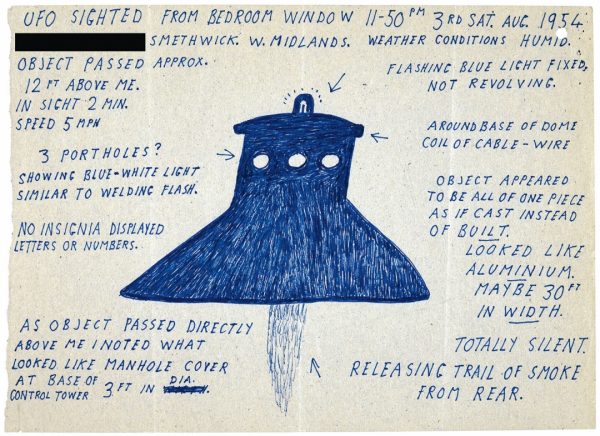 A US release of the book is planned for February 2018. As Clarke, a reader and principal lecturer in journalism at Sheffield Hallam University, explains in a book essay, the first release of UFO documents in 2007 came after years of effort:

The opening of these formerly secret files was a personal victory for me. For a decade before the MoD’s announcement I had waged a long campaign, using new powers under Britain’s Freedom of Information Act (FOI), for the full disclosure of Britain’s UFO files. From 2005, when the act came into force, I used a series of targeted FOI requests under the new act to persuade the Ministry of Defence to make their UFO material available for academic researchers. I argued there was a genuine public interest in how the government had investigated sightings of mysterious objects in the sky and that, by embracing greater openness, they could dispel many misconceptions about a subject long mired in unnecessary secrecy.