If you’ve seen the recent Blade Runner 2049 movie then you know the building, cityscape, and wasteland scenes are something of awe. How and why? Because they’re real. Or at least they’re miniatures. In other words things like this:

Another view of our @bladerunnermovie miniatures for LA, this time worked on by Rob. Even standing up straight, the building dwarfs him. #photooftheday #filmmaking #handmade #bladerunner2049 #wetaworkshop #miniatures

Our massive miniature for @bladerunnermovie – standing at nearly 5 metres tall, it was so large that we had to build it lying down and lift it with a chain block! 3D modelled, it was built with laser-cut components and then textured by hand, section by section. The shot here was captured in camera thanks to the magic of practical effects. #wetaworkshop #photooftheday #BladeRunner #miniatures #handmade #filmmaking

And it’s not just the buildings as seen from far and wide. A lot – and I mean a lot – of detail was put into the buildings and landscapes themselves, down to individual points of light, detritus, graffiti, and more like so: 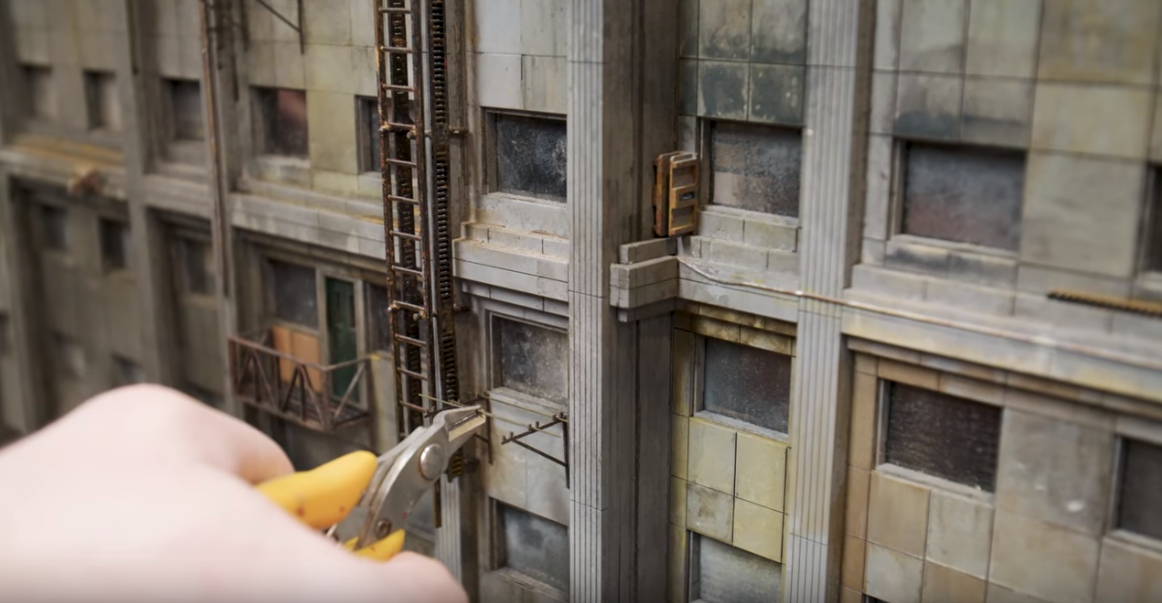 That’s a modelmaker placing an individual rod or rebar-like piece on an otherwise supertall structure – not the kind of thing you’re likely to zoom in and see in film, but the kind of thing that gives the whole model that much more authenticity! Check out the video below for more on the making of miniatures in Blade Runner 2049:

This was a passion project for our crew, who are huge fans of Ridley Scott’s iconic 1982 original.

Here in Wellington, NZ, we hand-made enormous miniature sets which were then filmed by legendary cinematographer Alex Funke. In the Design Studio, our team of conceptual designers helped give shape to the director’s vision.

I’ll also add that the use of miniatures in the Blade Runner movie universe actually has precedent, such as the Tyrell Corporation building miniature (about 4′ tall) permanently on view at the Museum of the Moving Image in Queens, NYC: