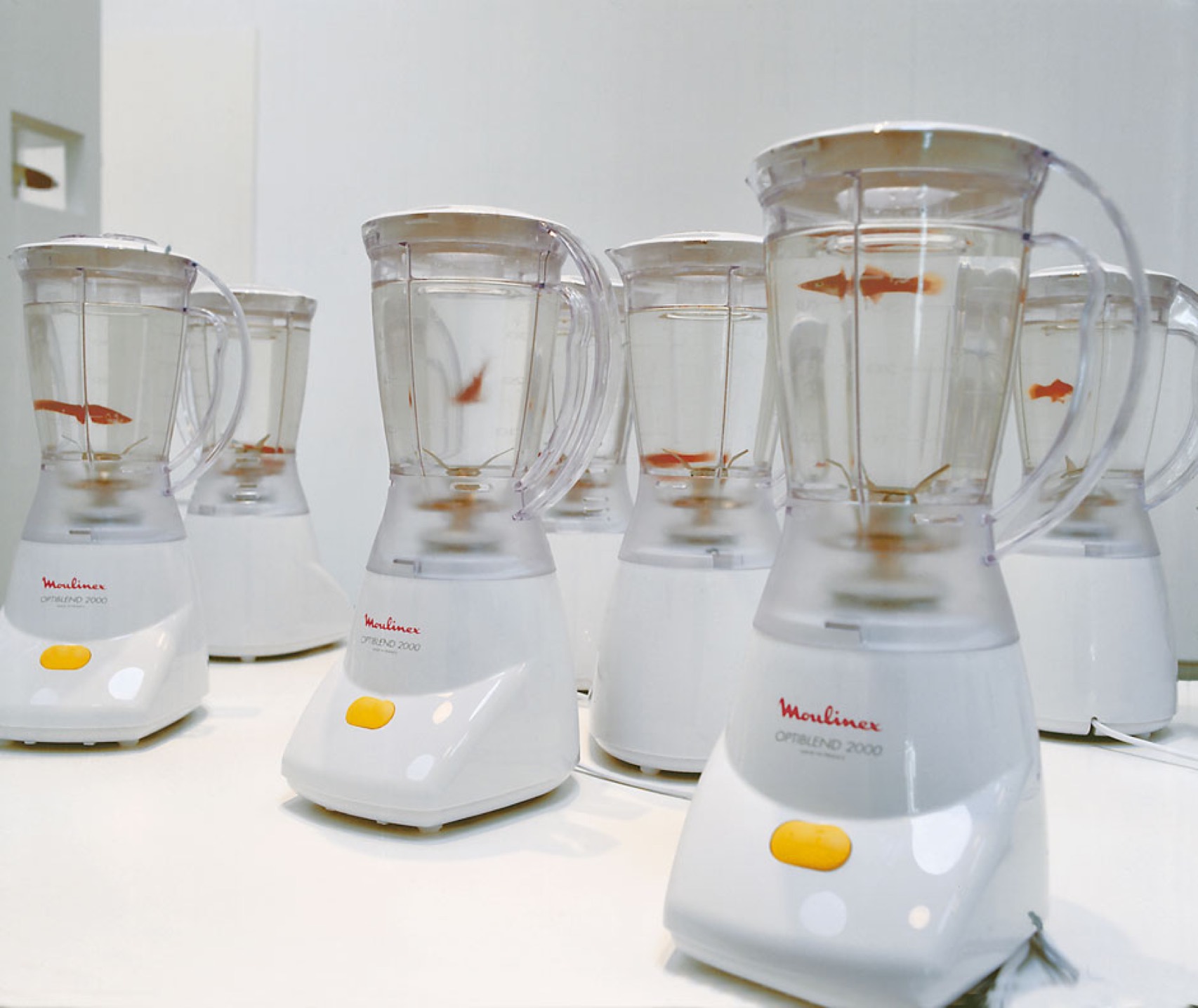 This work was originally part of the “Eye go black” exhibition in 2000, where the photograph was seen first, then the missile and lipsticks and finally a table with ten blenders containing living goldfish. The option of blending goldfish stole the thunder from the rest of the exhibition.

Evaristti gained notoriety for a museum display entitled Helena in 2000 that featured ten functional blenders containing live goldfish. The display, at the Trapholt Art Museum in Kolding, Denmark, invited guests to turn on the blenders. This led to museum director Peter Meyers being charged with and, later, acquitted of animal cruelty.

Why in the world is this being posted up as an art project? It was in a gallery, it’s art! Fish in a blender was 2000, in 1999 Joe Cartoon made a Macromedia Flash site devoted to “Gerbil in a Blender” and later “Frog in a Blender” (video) where the frog tempts you to blend the frog. Joe Cartoon also has a YouTube channel.

What did we learn about human nature? Nothing. Twitter was founded, March 21, 2006, San Francisco, CA. Every single day we place the blender on the table ordered with Amazon Prime, fill it with water, lovingly put ourselves in (the fish), plug the blender in, and then someone comes along and presses the button. Sometimes we press the button ourselves, other times, people we know press the button for us, and other times, and most often, it’s people we never met. Maybe it’s a Russian bot, maybe it’s someone you admire, maybe someone you hate, maybe it’s just -you- pressing it over and over.

Helena & El Pescador by Marco Evaristti debuted in the 2000, imagine an IoT blender -now- from GE, with fish in it, and anyone on Twitter can make fish soup with an @ or a #. It’s not hard to imagine, I’m sure it’s happening now -somewhere- at Y Combinator.

If I were in charge of allowing species to be in the galaxy membership club of intelligent civilizations that didn’t kill themselves, I’d ask “Hey, did you did pass that fish in a blender test we sent your artists?”. I’d also ask about their pets and ask to speak to their pets, but the blender test is right after some Arrival-style hellos are established.

Anyway – Back to the blender, a solution isn’t to unplug the blenders, or to ban blenders, or IoT blenders, or regulate fish, or pass laws stopping the liquidation of fish. It’s really all about one thing, what do we want to be? People that are cruel and blend fish ALWWAYS? Or people that have the measured restraint to not knowingly blend a fish.

I’ve tried to come up with ideas for comments online and Tweets, maybe before you comment or Tweet, it sends it to the 5 people you list to archive your stuff if you die “hey, is this a good idea to publicly post?” or something simple like a follow up form field “how to want people to feel when they read these words you wrote on a computer or phone, by yourself, alone?” – simple stuff, maybe. Certainly not good for Facebook.

You really need to admire the artist’s choice in blender, there is one button, press, die.

The museum decided (after the complaints) to unplug the blenders and the exhibit continued without the possibility of killing the fish. That’s an option, a WATCHMEN option, but that doesn’t seem to address the problem we may all have.

The court had earlier heard an expert witness from the blenders’ maker, Moulinex, that the fish had probably died within one second of the blender being switched on. A vet also told the court that the fish would have died painlessly.

We’re not fish. Humans die slowly, painfully, publicly, socially, there is nearly -instant devastation- we can do to each other, constantly, always, forever, that lasts our whole lives. There is no escape.

We can all hurt someone with the press of a button. Turns out being kind is just as easy, we just didn’t figure that out yet. It might just be more fun to press the button.