Meet ‘Oumuamua, the First-Ever Asteroid from Another Star 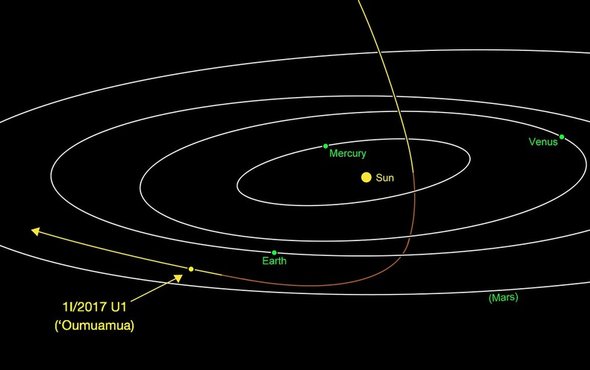 We now know what to call the mysterious object from interstellar space that zoomed past Earth last month.

The interloper—the first known interstellar body observed within our own solar system—has been named ‘Oumuamua, which means “a messenger from afar arriving first” in Hawaiian, representatives of the International Astronomical Union (IAU) announced yesterday (Nov. 14).

The IAU also approved an official scientific designation for ‘Oumuamua: 1I/2017 U1. This is a first-of-its-kind moniker; the “I” stands for “interstellar.” Previously, small objects like ‘Oumuamua have received standard comet or asteroid designations, which sport a “C” or “A,” respectively, in place of the “I.”

‘Oumuamua was first spotted on Oct. 19, by astronomers using the Pan-STARRS1 telescope in Hawaii. The smallish object was first classified as a comet but then regarded as an asteroid, after further observations revealed no evidence of a coma (the fuzzy cloud of gas and dust that surrounds a comet’s core).

Analysis of ‘Oumuamua’s trajectory soon revealed that it was on a hyperbolic path—that is, one that will take it out of the solar system. And the object doesn’t seem to have had any gravitational encounters with planets that could have nudged it onto such a path, which strongly suggests that ‘Oumuamua came from interstellar space, researchers have said.

Astronomers have determined that ‘Oumuamua made its closest pass by the sun on Sept. 9 and then zoomed within 15 million miles (24 million kilometers) of Earth on Oct. 14—about 60 times the distance from our planet to the moon. The object is now barreling toward the outer solar system at about 98,400 mph (158,360 km/h) relative to the sun, researchers have said.

Comments Off on Meet ‘Oumuamua, the First-Ever Asteroid from Another Star