Behnaz Farahi has created wearables in the past dealing with gaze, and her latest work will really make you bristle. Opale reacts to the facial expression of others thanks to a built-in camera. 52,000 strands of fiber embedded in silicon respond like the fur of an animal, moving to show different emotions like anger and surprise. This is a collaboration according to Farahi’s site.

The research is part of a broader ongoing collaboration into soft robotics between Behnaz Farahi and Paolo Salvagione, who developed compact mechanical and electrical systems deployed in this dress. The electrical circuit controls six low power electrical solenoids fitted with miniature CO2 capsules, capable of inflating pockets within the dress. Together with Julian Ceipek they wrote an algorithm to relay data from the camera to a micro controller in order to control the solenoids. 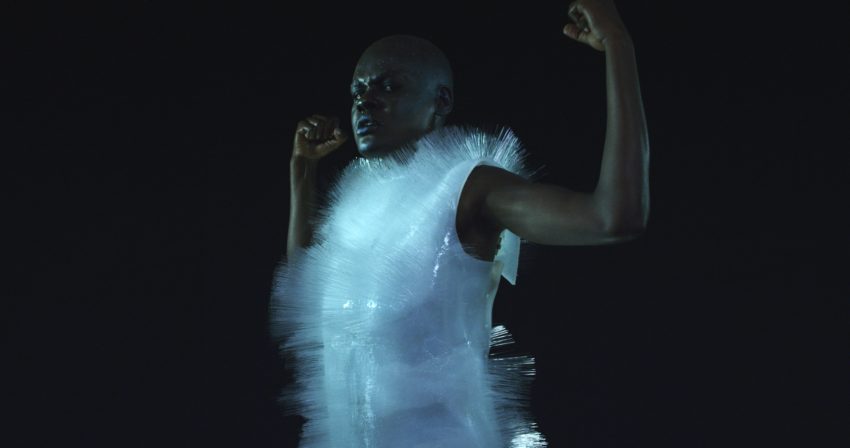 If you look carefully at the dress you can see the varying lengths of the fibers, which I thought was for interest. However, there is actually a lot of science here, according to Farahi.

This dress is of interest to me, not just because it uses soft robotics, but also because of where it lands in the timeline of aggression today. People are quick to react and this garment brings attention to the many ways this takes form. How do people feel seeing their facial expression through the lens of a dress? If people wore clothing that expressed emotions would they be treated differently? Could this change people’s behaviors? It’s an interesting experiment, and I’m happy to see this research get funding. For those of you who would like to explore soft robotics, take a look at our learning guide for a Silicone Robo-Tentacle. It’s the squishy way to approach movement and will give you an appreciation for Farahi’s work.