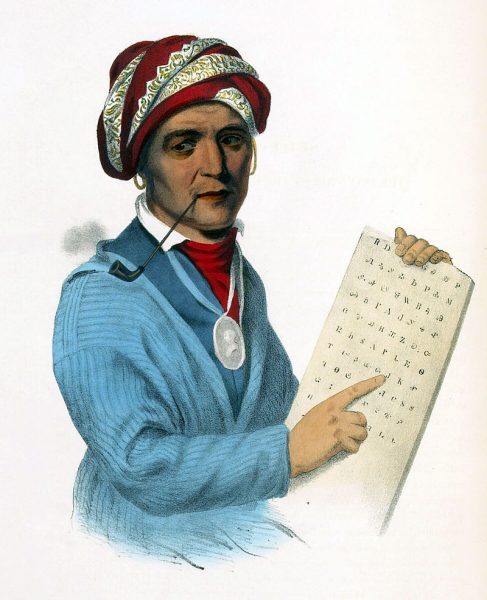 Sequoyah was a Cherokee silversmith. In 1821 he completed his independent creation of a Cherokee syllabary, making reading and writing in Cherokee possible. This was one of the very few times in recorded history that a member of a pre-literate people created an original, effective writing system. After seeing its worth, the people of the Cherokee Nation rapidly began to use his syllabary and officially adopted it in 1825. Their literacy rate quickly surpassed that of surrounding European-American settlers — Wikipedia

Sequoyah watched in awe as white settlers made marks on paper, convinced that these “talking leaves” were the source of white power and success. This inspired the consuming ambition of his life: to create a Cherokee written language.

Born around 1770 near present-day Knoxville, Tenn., he was given the name George Gist (or Guess) by his father, an English fur trader, and his mother, a daughter of a prominent Cherokee family. But it was as Sequoyah that around 1809 he started devising a writing system for the spoken Cherokee language. 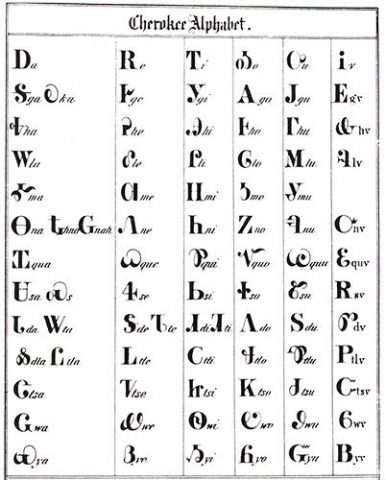 Ten years later, despite the ridicule of friends who thought him crazed, he completed the script, in which each of the 85 characters represented a distinct sound in the spoken tongue, and combinations of these syllables spelled words. Within a few years, most Cherokees had adopted this syllabary, and Sequoyah became a folk hero as the inventor of the first Native American script in North America.

It may be, as is often noted, that his achievement is the only known instance of an individual’s single-handedly creating an entirely new system of writing.

An archaeologist and explorer of caves has now found what he thinks are the earliest known examples of the Sequoyah syllabary. The characters are cut into the wall of a cave in southeastern Kentucky, a place sacred to the Cherokee as the traditional burial site of a revered chief. The archaeologist, Kenneth B. Tankersley of the University of Cincinnati, said in an interview recently that this was “one of the most fascinating and important finds in my career,” yielding likely insights into “the genius of Sequoyah.”

Comments Off on Sequoyah #NativeAmericanHeritageMonth