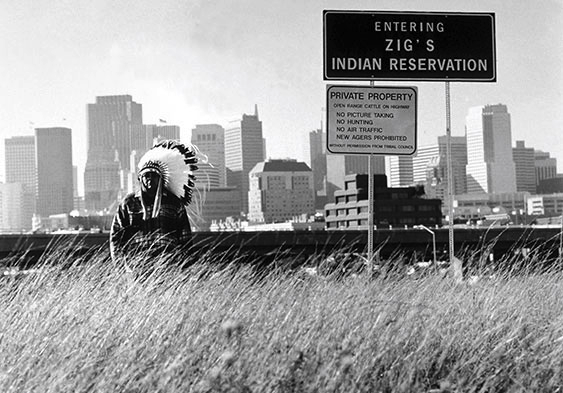 While this exhibition happened in 2016, we think the message transcends time and is still worth thoughtful consideration. From the Portland Art Museum:

This major exhibition features contemporary photographs by Native American photographers Zig Jackson, Wendy Red Star, and Will Wilson in dialogue with photographs from Edward Sheriff Curtis’ renowned body of work The North American Indian. This timely exhibition and associated educational programming will ask visitors to consider Curtis’ continuing influence on the interpretation of Native American culture while highlighting contemporary reactions to his complex role within the history of representation of indigenous peoples. Contemporary Native Photographers and the Edward Curtis Legacy: Zig Jackson, Wendy Red Star, Will Wilson will feature multiple volumes from the groundbreaking publication The North American Indian. Funded by financier and philanthropist J.P. Morgan, the 20-book set was published in a limited edition between 1907 and 1930. Curtis’ magnum opus charts the cultural practices, languages, and traditions of more than eighty Native American tribes. Over 1,500 photogravures illustrate the book volumes, and the portfolios hold an additional 700 large-scale images. Rich both for its artistry and historical content, The North American Indian is considered one of the most significant non-indigenous records of Native American culture ever produced, and the Museum possesses a complete set.

Curtis, a non-Native who believed that Native Americans were a “vanishing race,” produced a meaningful yet romanticized record of tribal life at the turn of the twentieth century. The photographs he included in The North American Indian document significant aspects of daily life and material culture and encourage nostalgia for societies under threat of elimination. This beautiful but often idealized representation of Native culture has elicited both praise and scrutiny, as many photographs were posed and manipulated in order to eliminate signs of modern life and create the artifice of a pre-European snapshot in time. Yet, because of Curtis’ thorough documentation, some present-day tribal members utilize The North American Indian to identify ancestors and cultural objects critical to their histories.

In response to the current, rich dialogues surrounding Curtis’ photographs, the exhibition will showcase contemporary portraiture by Native American photographers alongside Curtis’ work. In juxtaposing a non-Native with Native perspectives, the exhibition asks audiences to think critically about the portrayal of Native experience through photography.