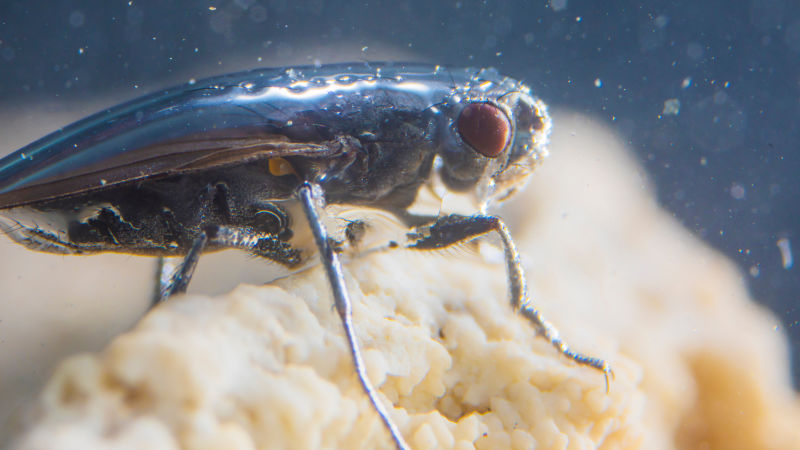 If you’ve ever seen an outdoor swimming pool between cleanings, then you’re well aware of the death trap that standing water can be for flying insects. Bees, grasshoppers, and flies all easily tumble into the chlorinated sea, only to find themselves drenched and unable to fly away. But one type of fly is both at home in the air and under water. Alkali flies (Ephydra hians) dive into a lake, feed on the bottom, and shoot back to the surface to fly away, staying drier than a saltine the whole time. Now, scientists have figured out how they pull it off.

If you’re an aquatic organism, California’s Mono Lake isn’t the easiest place to try and make a life. The huge, shallow lake is three times as salty as the Pacific Ocean. It’s also ridiculously alkaline, with a pH similar to that of detergent, making the water feel soapy and slippery. This combination makes its waters deadly to most animals and plants. But, Mono Lake does support some life, like bacteria, large blooms of algae, and trillions of brine shrimp. It also hosts enormous numbers of waterfowl and shorebirds—migratory and resident alike—many of which feed on one of the lake’s more famous phenomena: vast, black clouds of alkali flies.

The alkali fly is found across western North America, but it does particularly well for itself at Mono, where it breeds in massive quantities. As larvae, the insects largely graze on algae. Incredibly, the adults do this too, taking advantage of the plentiful underwater food source that contrasts with the barren lakeshore.

Once the adult flies crawl beneath the surface, their bodies are almost entirely enveloped by an air bubble as they nonchalantly walk around, looking preposterously out of place. They can stay down for up to fifteen minutes at depths of 25 feet or more, using the bubble as an air source and a layer of protection from their caustic dive site. The flies also lay their eggs at depth, quite literally because they can (no fish are around to harass them). When their scuba sesh is complete, they pop up to the surface like a cork, and fly off.

Researchers at the California Institute of Technology investigated just how they accomplish these feats, and their findings—published today in the Proceedings of the National Academy of Sciences—suggest that the alkali fly’s never-wetting superpowers come from an effective coupling of fly fuzz and god-tier waterproofing.

To get an understanding of the interaction between the chemical and physical properties of the flies and Mono Lake’s water, the research team developed a method for measuring the amount of force it takes for the fly to dip into and emerge from the water. By taking alkali flies, gluing them individually to tungsten rods, and using a motor to raise and lower a container of water, the researchers were able to dip the flies at a controlled rate. This fly-dunking contraption also used specialized instrumentation to measure the amount of force exerted on the fly as it was plunged into the water, and how much force was used to escape the water.

They found that alkali flies have to exert forces up to 18 times their body weight to enter the water, hulking out and gripping the bottom with burly claws on their feet, pulling themselves along against the buoyancy of their bubble. The team also found that Mono Lake’s water was particularly hard to escape from, with the alkali flies being “pushed” out of the water less with higher concentrations of the lake’s water in a mixture.