In Servo We Trust – Controlling 135 Servos with an Arduino 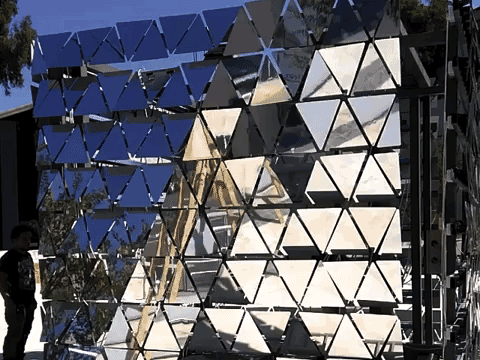 From Maya on Hackster.io:

I want to share with you a little story about challenging challenge, and how open source technologies, do open venues for expansion and learning that otherwise wouldn’t have been possible. Uraiqat architects, an Amman based design firm, talked to me about their vision of implementing a cube that is 100% fully reflective, and designed as a tessellated surface that provides a smooth motion, with a clear wave, live effect. This was their participation for Amman Design Week, last October.

Technically speaking, everything is possible, and realistically speaking it is doable to control over 500 motors at once, to end up in individual movements of each triangle, which shall together drive a geometrical effect.

As an architect turned interaction designer, I am always consciously aware of the borderline between fascination with technology, versus using technology to achieve what couldn’t be achieved in an analogue way. In some cases the conceptual statement could be achieved by any other of analogue method, but the designers would choose to take the extra complicated approach “because we can!” and there is a learning curve tied to understand why you are doing, what you are doing.

The timeframe was 6 weeks. In six weeks I was supposed to engineer a cubic structure to allow free movements of its 550 pieces, where the movement and interaction scenarios are supposed to reveal the concept of how you see yourself within the city. I took a week to think of whether I should say yes or no. Tempted by the fact of building something big, which is borderline architecture work, and by the fact that nearly no components existed in the country, and nobody (probably including the architects themselves) believed, that this thing could actually be built. I ended up saying, Yes. And, the journey began.

So I need find a way to control 134 triangles in a sync motion, and through those motions, I need to design interaction scenarios that reveal interaction with the city and oneself.