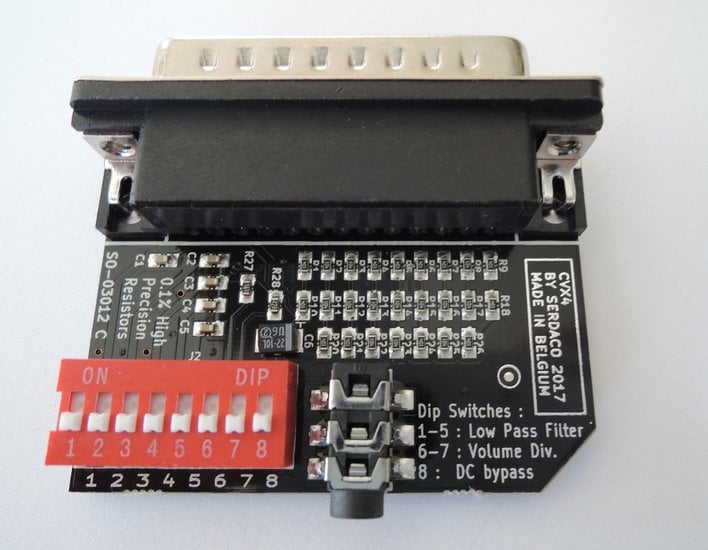 Check out Scali’s OpenBlog about the release of the CVX4 Covox Speech Thing clone! (Available for purchase here.)

In this video from The 8-Bit Guy he gives a breakdown of the original Covox Speech Thing (as well as the Disney Sound Source) with some good context of the era in which the device came out, and why it was so novel:

And this video breaks down what the modern clone is all about:

I have covered various early sound solutions from the DOS/8088 era recently, including AdLib, Sound Blaster, PCjr/Tandy’s SN76489 chip, and the trusty old PC speaker itself. One device that has yet to be mentioned however, is the Covox Speech Thing.

So it is basically an 8-bit DAC that plugs into the printer port of a PC (or in theory other computers with a compatible printer port). The DAC is of the ‘resistor ladder‘ type, which is interesting, because a resistor ladder is a passive device. It does not require a power source at all. The analog signal coming from the DAC is not very powerful though, so there is an amplifier integrated into the speakers. You can also run the output into a regular amplifier or recording equipment or such, but the output is not ‘line-level’, it is closer to ‘microphone-level’, so you may want to use a small pre-amplifier between the Covox and your other equipment.

So how does one program sound on a Covox? Well, it is very similar to outputting samples via PWM on the PC speaker, or outputting 4-bit samples by adjusting the volume register on the SN76489. That is, there is no DMA, buffering or timing inside the device whatsoever. The CPU has to write each sample at the exact time that it should be output, so you will either be using a timer interrupt running at the sampling frequency, or a cycle-counted inner loop which outputs a sample at every N CPU cycles. So this means that the sound quality is at least partly related to the replay code being used: the more accurate the timing is, the less temporal jitter the resulting analog signal will have.

So, such a simple device, with so few components (the real Covox has only one component inside, it uses a resistor ladder in a DIP package), and relying so much on the CPU, how good can this sound really? Well, my initial expectations were not that high. Somewhere in the early 90s, before I had my first sound card, I found the schematics for building your own Covox-compatible device. As said, it’s just a simple resistor ladder, so it can be built with just a few components. Various PC demos, trackers and MOD players included Covox support, and schematics. There were (and still are) also various cheap clones of the Covox available.