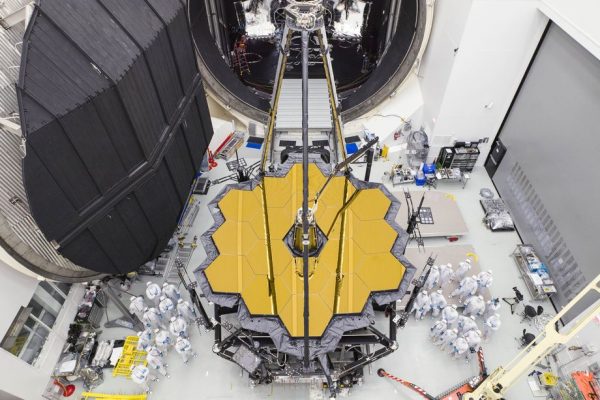 Last week, NASA’s next big powerful space observatory — the James Webb Space Telescope — was removed from the giant, cryogenic testing chamber it’s been living in since July at NASA’s Johnson Space Center in Houston. The telescope just finished up around 100 days of testing inside the chamber, where it was subjected to super-cold temperatures to see if it was ready for the frigid conditions of space. Now, JWST will soon be moved to California for another round of testing, before the spacecraft’s scheduled launch in 2019.

JWST will soon be the most powerful space telescope ever built. Meant to orbit a million miles from Earth, the telescope will allow scientists to peer into the deepest recesses of the Universe, helping us to learn more about the first galaxies that ever formed. And with a primary mirror more than six times larger than that of NASA’s Hubble Space Telescope, JWST will have extremely high resolution, capable of studying the atmospheres of planets outside our Solar System.

But NASA needs to know that the telescope is hardy enough to withstand both launch and the harsh environment of space. Prior to the cryogenic testing, NASA put the telescope through rounds of acoustic and vibrational tests at Goddard Space Flight Center in Maryland to mimic the conditions the spacecraft might experience during its launch on a European Ariane 5 rocket. NASA temporarily paused those tests when JWST had an “unexpected response” to a vibrational test last December. But ultimately, NASA found the source of the problem and finished up testing before moving the telescope to Houston.

Now, the telescope’s next stop is the Redondo Beach location of Northrop Grumman, the primary defense contractor that has been building JWST for NASA. There, the main mirror of JWST will be united with its “sunshield” — a complex structure that’s designed to keep the telescope from getting overheated. JWST is meant to observe in infrared light, which means it needs to operate at super cold temperatures to work properly. The sunshield is made up of thin layers of a material called Kapton, which will expand and block out the intense heat from the Sun.