Happy New Year. We were on the Brooklyn Bridge at midnight, and went to lower Manhattan on a Brooklyn Bridge Walk Into the New Year, historical walk, which is part of NYC WALKS. Gwen’s portable mic and speaker stopped working, likely the cold, she just kept going and did a great job. It was about 9 to 12 degrees, I can’t feel cold anymore. 360 video above, click and drag or if you are on a phone go full screen and move it around. A couple pictures from last night below.

The Brooklyn Bridge was the first suspension bridge in the world to use steel for its cable wire.  John August Roebling designed the bridge so well that it is six times stronger than it was supposed to be!  No wonder it can handle 145,000 vehicles and 5,000 pedestrians that cross the bridge every day.  The most number of pedestrians that crossed the bridge in a single day was the 400th anniversary celebration of Christopher Columbus on October 12, 2017.  It was the first bridge in the world to be illuminated at night by electricity.  The Brooklyn Bridge was the world’s longest bridge from 1883 to 1890.  To prove that the bridge was secure to a skeptical audience, P. T. Barnum marched a herd of 21 elephants across the bridge in an 1884 publicity stunt beneficial for both the bridge and the circus.

There’s more to the story, Emily’s father-in-law died, then her husband got so sick, he couldn’t work on it building the bridge directly, that did not stop Emily, or the bridge being completed:

“On their return from their European studies, Emily and Washington were greeted with a turn of fate; Washington’s father died of tetanus, and Washington immediately took charge of the Brooklyn Bridge’s construction. As he immersed himself in the project, Washington developed decompression sickness, which was known at the time as “caisson disease.” which affected him so badly that he became bed-ridden. It was at this point that Emily stepped in as the “first woman field engineer” and saw out the completion of the Brooklyn Bridge.

As the only person to visit her husband during his sickness, Emily was to relay information from Washington to his assistants and report the progress of work on the bridge. She developed an extensive knowledge of strength of materials, stress analysis, cable construction, and calculating catenary curves through Washington’s teachings.

Emily’s knowledge was complemented by her prior interest in and study of the bridge’s construction upon her husband’s appointment to Chief Engineer. For the next fourteen years, Emily’s dedication to the completion of the Brooklyn Bridge was unyielding. She took over much of the chief engineer’s duties, including day-to-day supervision and project management. Emily and her husband jointly planned the bridge’s continued construction. She dealt with politicians, competing engineers, and all those associated with the work on the bridge to the point where people believed she was behind the bridge’s design.

In 1882, Washington’s title of chief engineer was in jeopardy because of his sickness. In order to allow him to retain his title, Emily went to gatherings of engineers and politicians to defend her husband. To the Roeblings’ relief, the politicians responded well to Emily’s speeches, and Washington was permitted to remain Chief Engineer of the Brooklyn Bridge.

The Brooklyn Bridge was completed in 1883. In advance of the official opening, carrying a rooster as a sign of victory, Emily Roebling was the first to cross the bridge by carriage. At the opening ceremony, Emily was honored in a speech by Abram Stevens Hewitt who said at the bridge was:

…an everlasting monument to the sacrificing devotion of a woman and of her capacity for that higher education from which she has been too long disbarred.

Today the Brooklyn Bridge is marked with a plaque dedicated to the memory of Emily, her husband Washington Roebling, and her father-in-law John A. Roebling.” 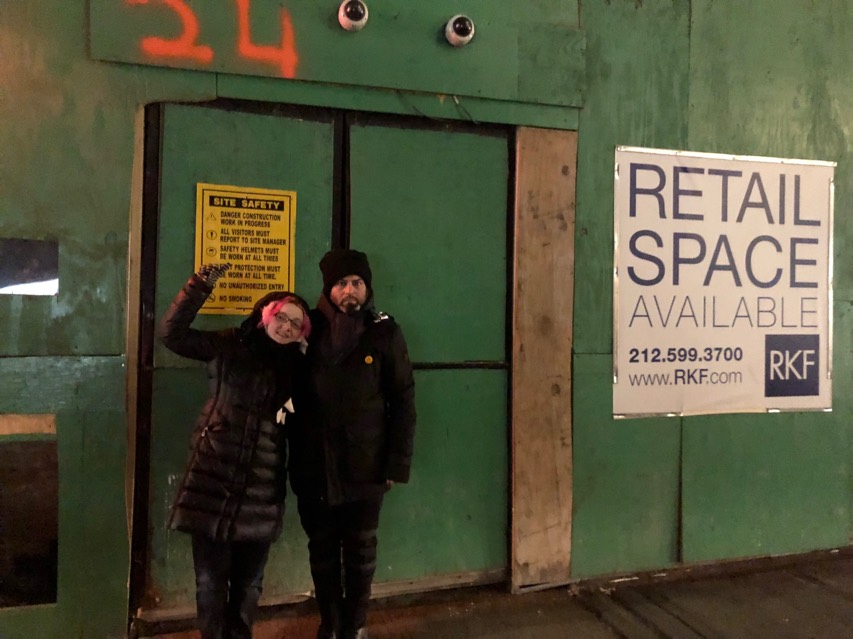 After midnight we visited the two previous Adafruit locations, a few blocks from Wall Street. The apartment we were in was condemned, we were forced to leave. It is finally a hotel or something, it’s not open yet. Towards the end as the place was getting condemned, the restaurant was closed on the ground floor, the mice started exploring the entire building, at one point Mosfet our cat was catching a few mice per night and would spot the mice in the light fixtures above us. Mosfet would meow to alert me of the ceiling mice that would fall, perhaps paratroopers, and I would catch and release them after seeing their mouse shadows crawl around the broken fluorescent light fixtures, there was no point killing the mice, they outnumbered Mosfet and I at least 1,000 to 1. Besides, he did not know how to kill a mouse, just caught them and brought them to me.

We then moved a block away, each night we would load up the green cart we purchased on Canal Street for $50. We still have it in our factory today; we would stop kitting/shipping around 10 pm, then complete as many trips as we could until we could not remain awake. We did that for weeks. 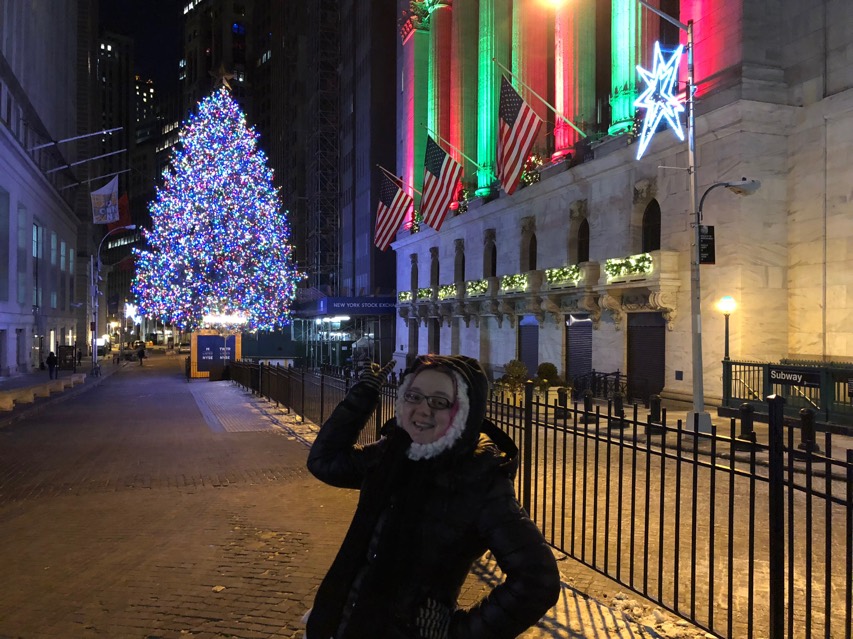 Each morning near Wall Street at 5am I would walk around and gather empty USPS Postal bins that were left out, this was so we’d have bins to put our orders in. The containers were often covered in expensive dog urine or whatever other things ended up in and on the bins. I would take them back, clean them. This daily ritual went on for years. If we had a lot of orders, we’d go out for dinner, a big day for us was 100 orders, or $1,000 in sales in one day, that was a bid deal. No Lipton Soup Secrets that night. If the timing worked out, it would be a good sales day and garbage night. In the Wall Street area, at the end of each month, we’d go out on trash night and find almost-new desks, chairs, everything. It was like a free Staples office supply that was open 1am to 5am, and no one moved stuff, they just threw it away. I am in sitting on a trash chair right now writing this; it was an excellent trash chair find. Most of everything we had was from Wall Street garbage. 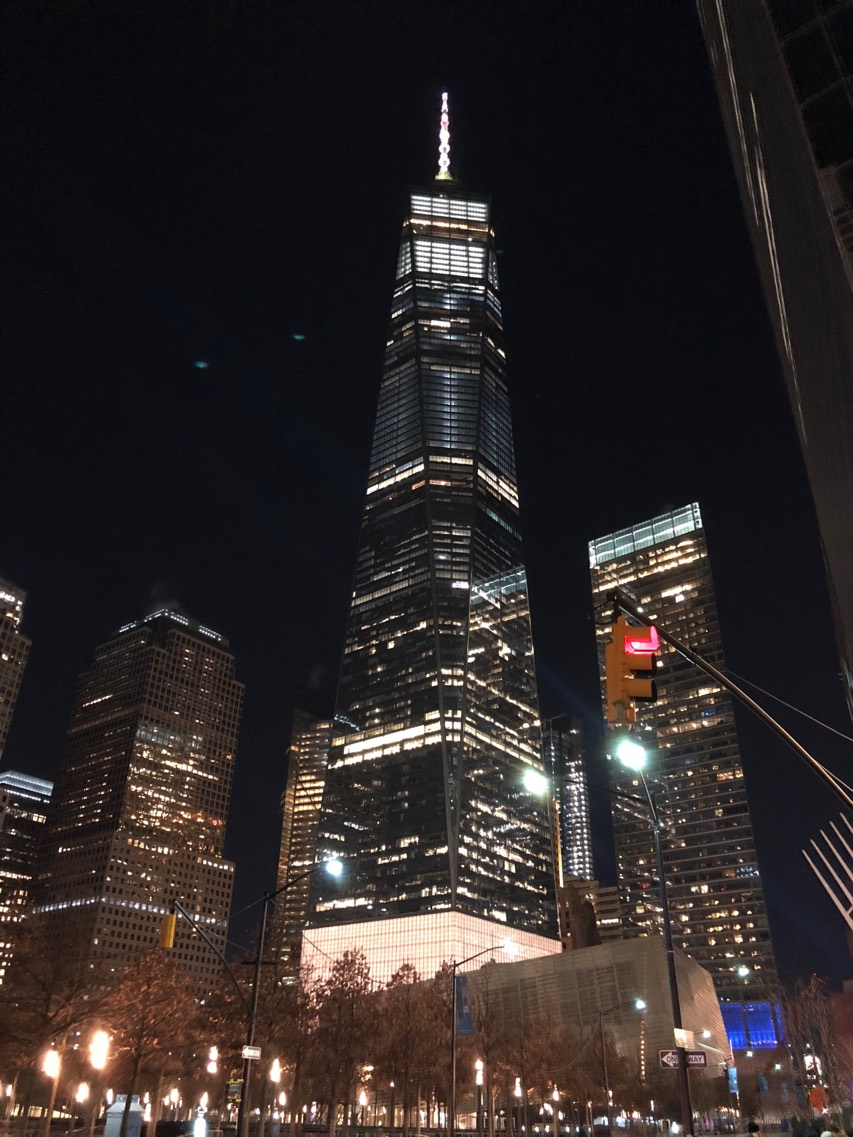 We were in the shadow of the Freedom Tower being built for most of Adafruit, for awhile it could not be seen, but the entire area was jackhammers, always, then one day a newly constructed floor poked up above the Wendy’s across the street out the window, in the area I shipped orders. As the tower grew and area rebuilt, Adafruit grew and were able to get two apartments, one for Adafruit and one for Adafruit storage. Up until then, we lived in Adafruit in one big room with everything. In the storage apartment, we lived with the boxes and Mosfet. In the other, the tiny pick and place was located in the “kitchen,” the reflow oven (toaster) was in the bedroom, the laser cutter was in what would be called a living room. Shipping, it was all there. ApartmentFruit.

It was good to revisit the area last night with some friends that were in town. The area has changed a lot, most of the memories are what isn’t there now, but many things still remain somewhere in New York City, like us, and this trash chair.