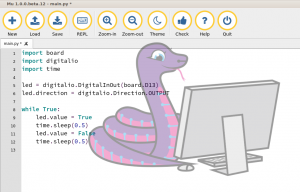 Fresh for the 2018 New Year, we are pleased to announce the release of CircuitPython 2.2.0 !

To install follow the instructions in our new Welcome to CircuitPython! guide. To install the latest libraries, see this page in that guide.

Try the latest version of the Mu editor for creating and editing your CircuitPython programs and for easy access to the CircuitPython serial connection (the REPL).

All builds except ESP8266 are available as both UF2 and bin files here along with test builds.

Documentation is available in readthedocs.io.

This release is based on MicroPython 1.9.2. Support upstream MicroPython by purchasing a PyBoard (from Adafruit here).

Filed under: CircuitPython — by Dan Halbert