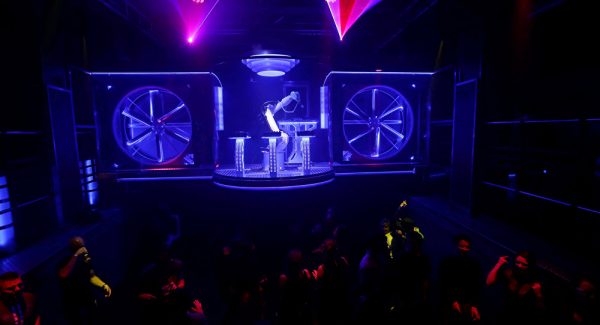 A club in Prague named Karlovy Lazne has recently introduced a robot DJ that alternates with a human to program music for the dance floor throughout the night, as reported by Reuters. Now in rotation for a few weeks, the robot has software that allows it to choose songs, select CDs from a rack, insert them into CDJs, and then play the songs. It also has some pretty sweet dance moves.

The club employed a robotics firm to have the robot specifically made for DJing. It’s an adaptation of a KUKA arm primarily used in the automotive industry. Rigged with software that helps it choose songs, the robot’s pincers grab CDs, and then show off some moves before placing them in one of the two CDJs in front of it. It’s unclear from the article if the software helps the robot consider songs based on things like key, BPM, genre, or other factors that would determine how well two tracks might sound together. It’s also unclear if the robot does more complex skills, like adjusting the speed of a song, EQing, or conducting the actual transition between songs. It is shown in the video hovering above knobs on the mixer and appearing to tap buttons on the CDJs, suggesting it does conduct some of these finer movements. We have reached out to Karlovy Lazne for details.

KUKA arms have a history of being adapted for musical purposes. A 2009 school project shows one attempting DJ movements with vinyl, and another 2009 video shows one selecting and rotating records on turntables to create ghostly scratching sounds. There was also this Nigel Standford music video from 2017, but it turned out to be sort of a party trick — the robots were doing the movements, but didn’t produce any of the music.

Comments Off on Make Robot DJ, not Robot Enemy #MusicMonday