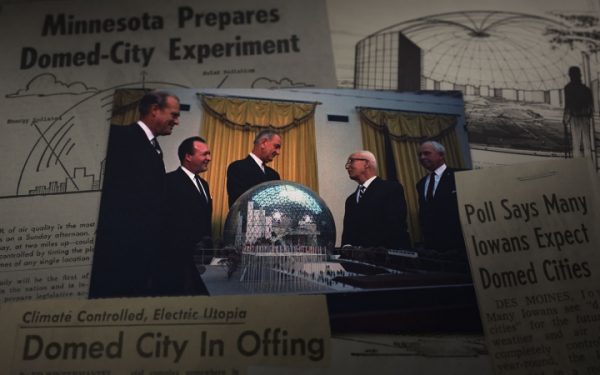 In the late 1960s, a group of scientists, city planners, architects, and inventors proposed a new city of 250,000 people who would fix urban problems through technology. Overcrowding, pollution, and sprawl would be addressed through self-driving roads, waste management reprocessing, modular housing, and underground tunnels for utilities, while a huge geodesic dome could regulate climate. Land was selected in a woodsy part of northern Minnesota, federal funding was acquired, and a 10-year construction timeline was drawn up. The idea was to start fresh with the American city, and then implement proven innovations on urban design in metropolitan areas around the country.

This is not a spoiler for the new feature-length documentary The Experimental City, but the Minnesota Experimental City (MXC) was never built. Optimistic dreams of the 1960s waned, and the people of Swatara, Minnesota, were not thrilled about having their local landscapes dug up for a space age metropolis and its nuclear power plant. Even in Minnesota, it became a footnote in midcentury history.

Comments Off on An Unrealized Domed City for Minnesota #ArtTuesday