These Enchanting Fireflies Are Actually A Robot Swarm #ArtTuesday 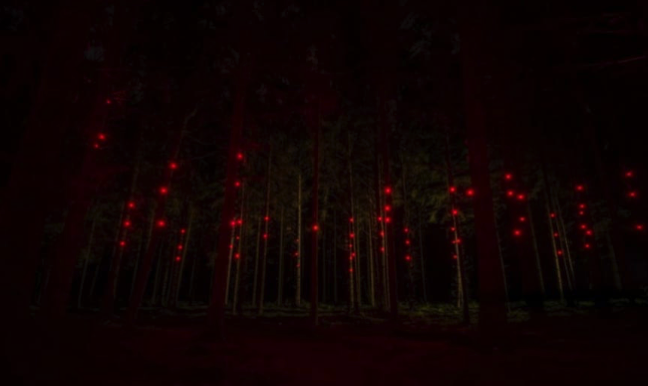 A flock of creatures rests on tree trunks in a dark winter forest in the Netherlands. The creatures glow red, responding to each other–conversing through light. Their flickering appears random, but step back, and a pattern begins to emerge.

The creatures aren’t bugs or birds–they’re robots that the Netherlands-based artist collective WERC installed and programmed to constantly interact with each other. The robotic swarm–called Pixi–was on display in the Buitencentrum Boomkroonpad forest area near the village of Drouwen in the Netherlands as a nighttime installation in the fall and winter of 2017. They were inactive during the day, preserving their batteries, but at night they came alive.

Thousands of wooden hexagonal robots were outfitted with blinking red lights and secured to tree trunks. Once initiated by a visitor entering with a specialized lantern, the Pixies begin to pass signals to each other. Controlled by a microprocessor that contains a set of rules that dictate its behavior, each robot acts based on what messages it receives from its neighbors, which it interprets as speed, duration, intensity, and color of light. As it blinks, it sends out more messages to its neighbors, passing along instructions based on internal code. When viewed up close, the bots’ blinking patterns don’t make much sense–but when viewed from far away, they turn into large-scale patterns. It’s almost like how flocks of birds, swarms of fireflies, or schools of fish act–individually, but in unison.

Pixi Drenthe from WERC on Vimeo.