The 50 most valuable scientific documents of 2017

2017 was a spectacular year in almost every facet of the auction industry specializing in historically significant and storied objects. The world’s most valuable painting, gemstone, earrings, wristwatch, manuscript and religious document all changed hands, but as usual, scant regard was paid to the landmark scientific texts that underpin mankind’s understanding of the world.

Indeed, the success of the 2017 auction year depends on the way in which it is measured.

The number of documents and manuscripts to sell for more than US$1,000,000 hit its lowest point in many years with just five exceeding that figure, only one of which was scientific in nature.

The influence of Albert Einstein, science’s rock star, is again obvious in our list for this year as a significant cache of correspondence sent by Einstein to his life-long friend Michele Besso found its way to auction, with the most significant letters and postcards fetching $377,635, $150,000, $137,500, $136,941 and $125,000 respectively.

The correspondence with Besso covers not just their shared passion for physics (Besso was his only acknowledged collaborator on the ground-breaking theory of Special Relativity), but every aspect of life, and the letters cover a 50 year period. Those with scientific content have been included and as usual, we’ve included a bunch of non-scientific documents and objects (marked DNQ) so that comparisons can be made on how the marketplace values significant cultural and religious artifacts. 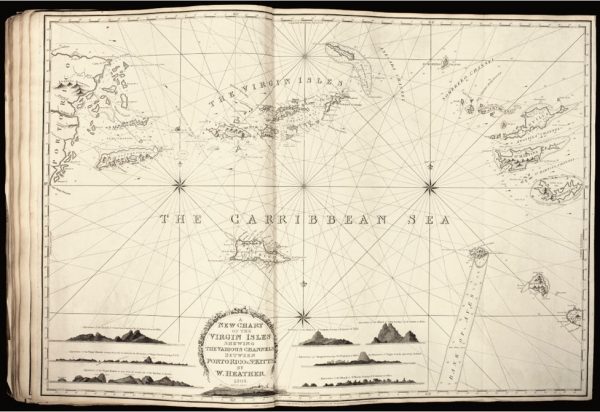 The frontispiece for this publication (in the image gallery) says it all: “The marine atlas : or seaman’s complete pilot for all the principal places in the known world, comprising a new and elegant collection of charts, accurately drawn and engraved from the most approved surveys and publications. Exhibiting on a large scale all the discoveries and improvements of the most celebrated navigators, both English and Foreign, ancient and modern, particularly those of Cook, MacKenzie, Wallis, Dixon, D’Apres, Clerke, Bougainville, Anson, Byron, Carteret, Forrest, Maurelle, King, Dalrymple, Dampier, Wilson, Vancouver, Furneaux, Portlock, Marchand, Phipps, Blight, Shortland, Perouse, etc with many additions and improvements. Now first made public under the patronage of several able and distinguished officers in the Navy and East-India Company’s service, the whole forming a valuable and extensive selection, methodized, arranged and published for the use of the mariners of Great Britain by W Heather.”

Comments Off on The 50 most valuable scientific documents of 2017