Within the circus community there’s an unwritten rule that no clown shall copy another clown’s makeup. The rule seems as silly as clowns themselves, but it’s actually a pretty big deal. So much so, that Clowns International—the world’s oldest clown society, headquartered in London—cleverly crafts an unusual visual record of each of their members’ looks by painting them on ceramic eggs. Each trademarked look also includes hand-made costumes and hats, made from swatches of the real-life clown’s attire. Now displayed at the Wookey Hole Clowns’ Museum, the society’s Clown Egg Registry was recently photographed by British photographer Luke Stephenson, who has a reputation for documenting “the eccentricity of Britain.” 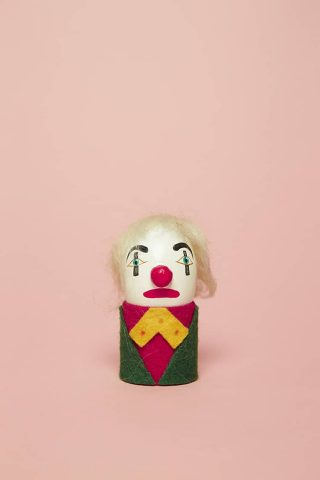 The clown egg tradition began in 1946 when Stan Bult, one of the members of Clowns International, started painting the faces of his fellow clowns on chicken eggs as a hobby. Sadly, most of his collection of approximately 200 eggs were destroyed during transport to an exhibition in the ‘60s. Around two decades later the clown egg tradition sprung up again, but this time, using sturdier ceramic eggs. While the eggs act as a visual record of each look, the clowns also had written records, complete with their name and serial number. Chris Stone, another member of Clowns International explains that the eggs are simply “the public face of the registration process.” 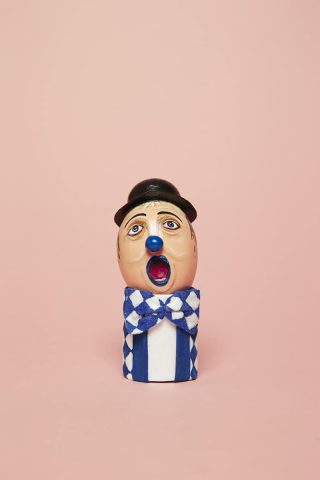 Stephenson’s 169 clown egg portraits were compiled into a book, and paired with the biographies of each clown, often “revealing the bizarre, surprising and often painful story of their private and public lives.” The photographs, set against a peach background capture the makeup and costumes in delightful detail. “PEE WEE” the clown is seen to have sported a top hat, blue nose, and a matching blue harlequin-patterned outfit, while “LULUBELLE” is shown to have worn an outfit made from a pink and purple silk-like fabric.