As the saying goes: “it was fun while it lasted”. I always expected the shopping spree from AliExpress, eBay and friends in China would come to an end one day but did not expect it to go out with such a bang. Today PostNord (they handle snail mail in Sweden) announced they will impose a 125SEK + 25% VAT fee (about €16 in total) on every single parcel arriving from China. I would not mind paying VAT on China imports but I do mind getting robbed by the mail man. Apparently, there is an inflow if 150k Chinese parcels every day in Sweden. PostNord expects that number to drop to 120k/day. Multiplied with 125SEK/parcel, this will lead to “significant income” according to the PostNord spin doctor. I expect not.

In the USA, here’s how it works “The Postal Service is losing millions a year to help you buy cheap stuff from China.”

According to the terms set out in Universal Postal Union treaty, the USPS in 2014 gets paid no more than about $1.50 for delivering a one-pound package from a foreign carrier, which makes it hard to cover costs. [1] The USPS inspector general’s office estimated that the USPS lost $79 million in fiscal year 2013 delivering this foreign treaty mail. (The Postal Service itself declined to provide specific figures.)

In an effort to ride the e-commerce boom, the Postal Service signed a deal in 2010 with China’s state carrier to sell a special service for small packages entering the U.S. For a small premium, the USPS offered tracking and delivery confirmation, an essential feature for online retailers, as well as expedited shipping.

The U.S. Postal Service entered into a deal with eBay and China Post last year to help Chinese sellers send small packages to the U.S. in a much shorter period of time than regular international delivery services. eBay revealed that the agreement has led to 30,000 parcels a day sent from its sellers in China, with package-tracking included.

Nearly 40% of eBay sellers in China are using the ePacket service to ship to the U.S., with over 80% of items delivered in five to 10 days. Upon arrival in the U.S., these shipments are processed as domestic First-Class Mail, with a one to three-day delivery standard.

WHY AND HOW CHINA POST AND USPS ARE KILLING YOUR PRIVATE LABELING BUSINESS (2017). 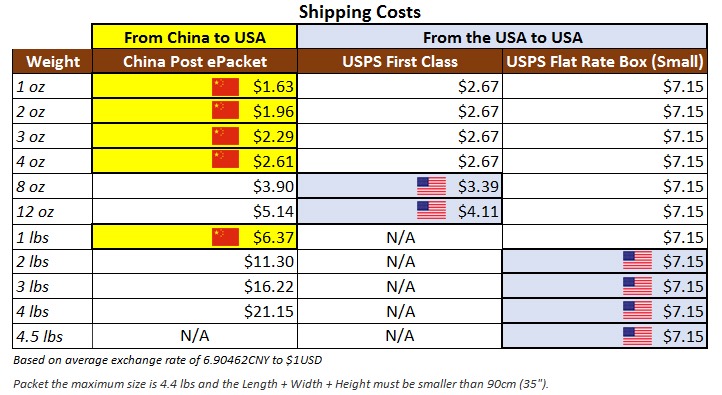