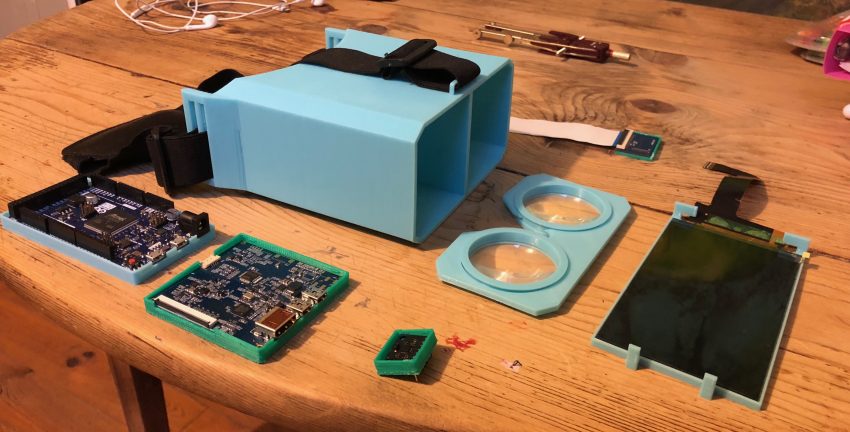 Everyone wants a VR headset, but of course they can be pricey. A few guys decided that money shouldn’t stop them from having a good time, so they set about making their own DIY headset for VR. This heartwarming story comes from Hackaday, and the most surprising detail is that this group of guys happens to be three teens in France supported by their fave teacher they call “Sensei”. This is not your normal science fair project.

Maxime Coutté was highly motivated to get this project up and running and received some stellar advice.

Thanks to this project I’ve had the incredible fortune to meet amazing people, including the chief architect at Oculus, Atman Binstock. He gave me a precious piece of advice: “open source it”. I deleted all the code I had, and started rewriting it all from scratch, better. And I convinced my two friends and our math teacher to put the project into open source.

Make sure to check out the team’s Github so you can see how Jonas Ceccon and Gabriel Combe worked with Maxime to make this dream project come together. Parts include an Arduino Due, a GY-521 MPU-6050, a 5.5 inch LCD Screen and a Fresnel lens, bringing the total just over $100. 3D printing launched the Relativ headset, but there was also some special coding required for the gaming. WRMHL was invented as a much needed communication between Arduino and Unity, while FastVR evolved to be an SDK to easily create VR games. Of course, Sensei (Jerome Dieudonne) deserves credit for sticking with these guys and doing some great number crunching while sharing his love of algorithms. I can tell you this VR project has me so excited that it will most likely make my Top 5 list for the year. Félicitations team Relativ and wishing you many more successful projects. For those of you who are VR fans, make sure to check out our 3D printed Video Goggle project. You’ll find the 3D print files along with some helpful code for VR. Open source can be a great way to connect with the things you love.