Finding the Roots of Graphic Novels in the Ancient World #ArtTuesday 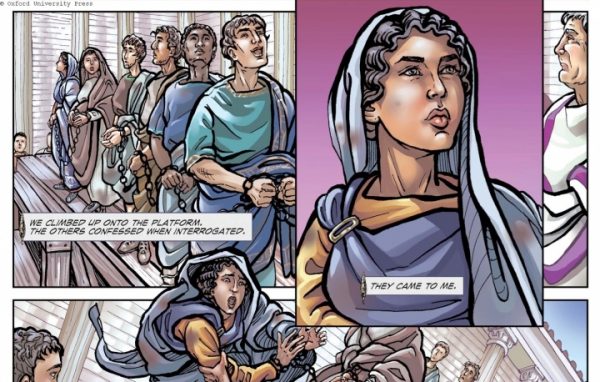 Graphic novels have long been a powerful medium for speaking to the masses, even if they haven’t been referred to as such. The stories told through ancient art have spoken to more people than most ancient authors, and yet they have never received the same respect as writers such as Thucydides or Virgil. In part, this stems from the belief that the written word and literacy are two elements of a refined civilization. However, expanding out ideas of literacy to include a more graphic lexicon not only elevates comics, graphic novels, and other narrative art forms, it allows us to read the ancient world much more successfully.

Comics and graphic novels have a disputed origin story, the features of which depend on how exactly you define the medium. The etymology of the term dates back to the use of comical cartoon strips inserted into American newspapers in the late 19th century. However, if comics are broadly construed as a series of artistic panels that form graphic narratives, one could argue for their birth as early as the cave paintings of Paleolithic France.

Recent research on the use of graphic narratives in the ancient world has revealed their value to everyday people in the ancient Mediterranean — similar to modern audiences’ appreciation for such work. George Kovacs, a professor of Ancient Greek and Roman Studies at Trent University, has written extensively on the use of graphic storytelling in antiquity. He emphasizes that while people have often dismissed such storytelling as lower in status than the liberal arts of epic poetry or historical prose, visual works were crucial for building complex narratives that could stand in for alphabetic literacy.