Five-thousand-year-old stone carvings found in the Kashmir Valley may represent the earliest known recording of a supernova, according to a group of Indian scientists. Their study, published in the Indian Journal of History of Science, reinterprets a curious scene: since archaeologists unearthed the irregular stone slab in 1969, experts have believed that its markings depict a hunting scene, with armed men chasing fauna beneath two radiating, sun-like objects. 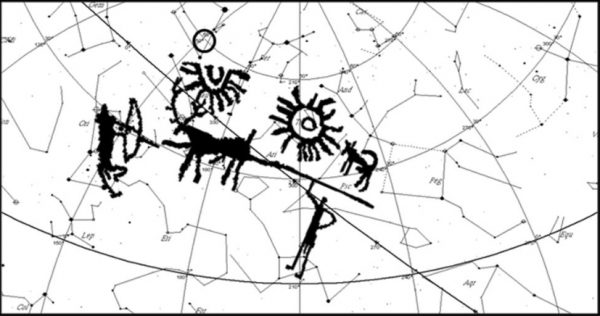 “Our first argument was, there cannot be two suns,” astrophysicist Mayank Vahia told the Guardian. “We thought it must have been an object that appeared and attracted the attention of the artists.”

Vahia and his team also ruled out the possibility that the carvers were depicting the sun together with the moon, since the full moon does not appear that close to the sun. The scientists then theorized that the object could be a supernova — the super explosion of a star that creates an extremely brilliant flash as it unfolds.

Astronomers have been able to determine the locations and timings of past supernovas by studying the x-rays they radiate for centuries after they explode. Vahia and his team searched records of past supernovas, for those that would have exploded during the right period and were bright enough to see from the stone’s original site. They found one strong candidate: Supernova HB9, a star that exploded around 4,600 BCE.