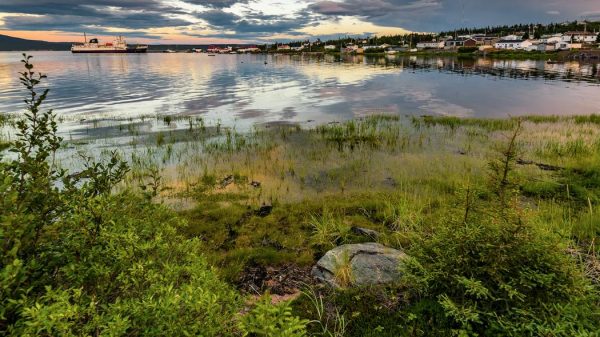 An app called eNuk is being configured to run on the network and help residents in northern Canada swap information about their changing environment.

Inhabitants of Rigolet, a tiny Inuit town on the north coast of Labrador, are helping researchers build a climate-change monitoring app that’s usable without a conventional internet connection—and the underlying technology that enables ISP-less browsing could be a model for internet-starved communities across the North.

The app, called eNuk, launched as a pilot in Rigolet in early 2017. It was conceived of by a Rigolet resident and built by a combination of community members, local government officials, and researchers at Newfoundland’s Memorial University and the University of Guelph in Ontario. Today, RightMesh, a Vancouver-based company, announced that it will help establish a mesh network—a decentralized internet network, in which devices act as not only receivers but transmitters—for the town to support the eNuk app.

The app—which allows residents to share and tag locations with text, pictures, or video—was designed to help residents cope with unpredictable conditions formed by rising ocean temperatures. Over the last 114 years, the waters around Newfoundland and Labrador have risen by 1.5 to 2 ℃, according to a recent provincial report on climate change. Stable, thick ice that once allowed residents to hunt and fish, or drive on ice highways between Rigolet and surrounding communities, is growing alarmingly, even dangerously, thin.

But another problem has potentially limited eNuk’s life-saving potential. In addition to its climate change-related troubles, internet access is painfully slow in Rigolet. When Dan Gillis, an associate professor at the University of Guelph’s School of Computer Science, visits Rigolet to work on the app, he and his team often time their emails to send overnight so as not to crash their hosts’ internet, he told me.

“The connectivity is just so bad that we needed some other method of sharing information,” he said in a phone interview.

Enter RightMesh, billed as a mobile mesh networking platform that uses blockchain technology, a decentralized ledger that chronologically tracks information. RightMesh provides an on-platform token system—based on the Ethereum blockchain—that allows users with an internet connection to sell their bandwidth to mesh users who don’t, without a centralized authority mediating the trade. The company is handling the technical side of the project, while Rigolet residents—two of whom are employed as research associates—provide extensive feedback.