History of Philips’ Semiconductors in the 1950s 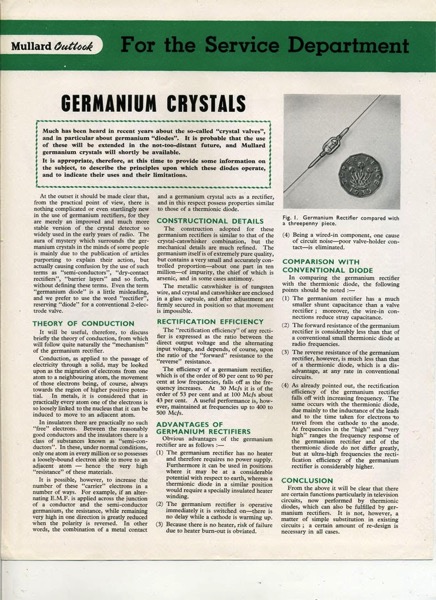 Great and thorough history of Philips’ semiconductors in the 1950s from Mark P D Burgess, via Evil Mad Scientist.

Phiilips was founded in 1891 by Gerard Philips in Eindhoven, the Netherlands. Early on its products included incandescent bulbs which led it to begin producing vacuum tubes initially under contract in 1917 and then in its own name from 1919. [Tyne 1977] The company quickly became a major European tube and radio receiver manufacturer. Later it branched out into consumer electrical and electronic  products.

From 1914 its research and development was carried out at the Eindhoven Natuurkundig Laboratorium usually abbreviated to Natlab. This is where the history of Philips’ semiconductor developments begins.

In the 1950s Natlab was comprised of three sections each with a Director:

Philips had formed a dedicated solid state physics group within NatLab in the 1930s. It worked on the known semiconductors of the time: copper oxide and selenium and developed a selenium diode that went into production at the Electron Tubes product division. But it had no success with its research in solid state amplifiers and field effect devices. However, this group provided an important platform and the focus as Philips positioned itself for the semiconductor era.

Bell Laboratories announced its point-contact transistor in June 1948: “An amazingly simple device, capable of performing efficiently nearly all the functions of an ordinary vacuum tube, was demonstrated for the first time yesterday at Bell Telephone Laboratories where it was invented.” The press release was coupled with three short papers by Bardeen, Brattain, Shockley and Pearson in the letters to the Physical Review for June 1948 of which the first of these set out in the briefest terms the geometry, performance and theory of the device. [Bardeen 1948]

Comments Off on History of Philips’ Semiconductors in the 1950s