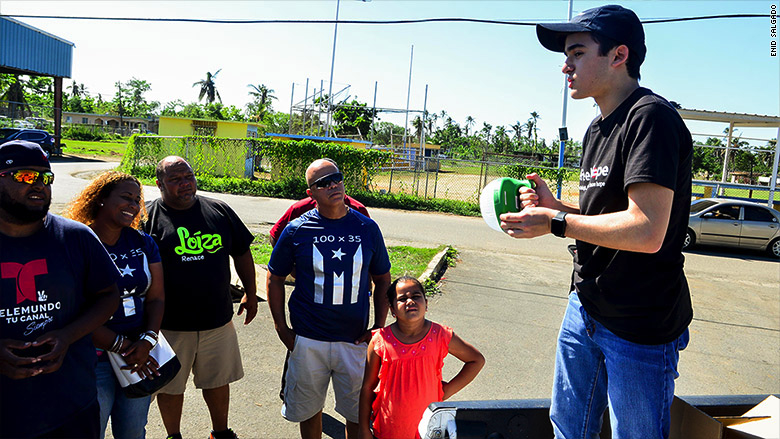 Just days after Maria slammed Puerto Rico, the ninth grader launched a crowdfunding campaign on fundraising platform Generosity. His goal: to raise $100,000 and use the money to buy portable lamps and hand-operated washing machines for residents in the hardest hit parts of Puerto Rico.

With the help of his family, friends and other volunteers, Gomez Colon started distributing the solar lamps last November through his initiative C+Feel = Hope.

“When we went to the first town that has no power, people from other towns would hear what we were doing. So we would add that town to our list for our next distribution,” he said.

With his mother’s help, he sought a nonprofit organization to partner with and launched his online campaign.

As the money came in, Gomez Colon contacted makers of portable solar lamps and washing machines. To date, he’s secured close to 300 hand-powered washing machines from companies like Gentlewasher and EasyGo and more than 3,000 lamps — including some that have mobile phone charging capabilities — from Mpowerd, Schneider Electric and Omnivoltaic Energy Solutions, among other companies.

Last week, he led the first distribution of the hand-operated washing machines to families in Naranjito, a town located in central Puerto Rico. “Every weekend that we’ve gone for a distribution has made me feel so good,” he said. “But it’s complicated. We are helping people, but there are just so many others also in need.”