Read more about her inspiring life and work from her 1986 NYTimes Obituary. 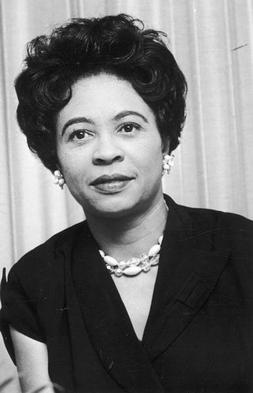 Daisy Lee Gatson Bates was born in the small southern Arkansas community of Huttig, in Union County, November 11, 1914. Typical of early twentieth century race relations, her natural parents experienced the violence and powerlessness of the rural South. Her mother was killed resisting the sexual advances of three local white men and her father left shortly thereafter. Daisy was reared by friends of the family, the only parents she ever knew.
In 1942, Daisy Lee Gatson married L. C. Bates (1901-1980) and settled in Little Rock. Born in Liberty, Amite County, Mississippi, L. C. Bates attended Alcorn A & M College (now Alcorn State University) in Alcorn, Mississippi and Wilberforce University in Ohio. Although he was an insurance agent when Daisy met him, L. C. had previously worked for a Colorado newspaper for three years and later joined the staff of the Kansas City Call in Missouri. After working for newspapers in California and Memphis, he moved to Little Rock and established the weekly Arkansas State Press; the first issue appeared May 9, 1941. It became the largest and most influential black paper in the state.

During its eighteen-year history, the Arkansas State Press became a leading voice in the Civil Rights Movement. Unrelenting in its criticism, the paper attacked police brutality, segregation and the inequities of the criminal justice system. In 1948, the paper supported the candidacy of Sidney McMath for governor against segregationist Jack Holt and in 1952 supported former Governor Francis Cherry in his re-election bid against Orval Faubus.

The Bateses were members of the NAACP [National Association for the Advancement of Colored People] from the time of their move to Little Rock. In 1952 Daisy was elected president of the Arkansas State Conference of NAACP branches. It was in this capacity that Daisy Bates became the advisor to the Little Rock Nine. The Little Rock School Board’s desegregation plan, upheld by the District Federal Court and the Eighth Circuit Court of Appeals, was to begin September, 1957 at the senior high school level at Central High School.

Because of their involvement in the integration of Central High, the subsequent loss of advertising revenue forced the Bates to close the State Press in 1959. In 1960, L. C. became NAACP field director for the state until his retirement in 1971. In 1960, Mrs. Bates moved to New York City and spent two years writing her memoirs of the Central High crisis. The Long Shadow of Little Rock was published in 1962 with an introduction by Eleanor Roosevelt. After completion of the book, Mrs. Bates moved to Washington, D.C., where she worked for the Democratic National Committee and for the Johnson Administration’s anti-poverty programs. After suffering a stroke in 1965, she returned to Little Rock.