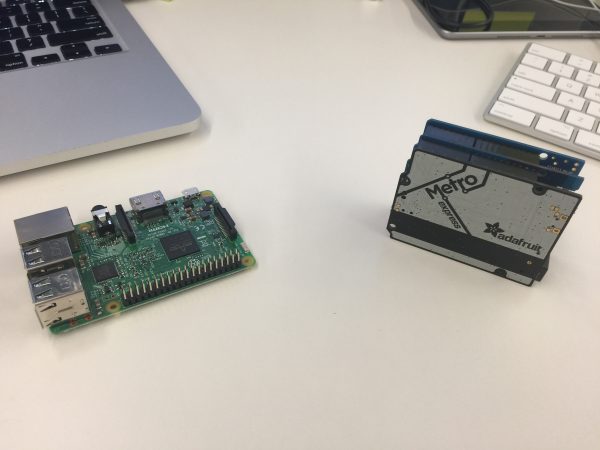 So, a few days ago I mentioned to a coworker that I wanted to start an IoT (Internet of Things) project using a Metro M0 Express, then on the following day… a Metro M0 was placed on my desk!

Later, I was stuck with the dilemma of figuring out which project to start. Am I able to create a Quadruped Spider robot that I can control over WiFi, or a GPS Vehicle tracker, etc. I needed to figure out if I received the correct board for the project that I will be starting. Should I’ve gotten a Raspberry Pi or the Metro M0 Express?

After a bit of research, I’ve come to a simple conclusion that: if I can describe the project in less than two ‘and’s, use a Metro M0 Express. If you need more than two ‘and’s, get a Raspberry Pi.

The Metro M0 Express is best used for simple repetitive tasks: turning on and off a light switch, reading the outside or indoor temperature and reporting it to Twitter, driving a simple robot and many other simpler things. The Raspberry Pi is best used when you need a full-fledged computer to driving a more complicated robot, performing multiple tasks, doing intense calculations. Coming from an iOS developer background, there aren’t many parallels when it comes to starting any of these project, but I know that using the Metro M0 will suite my situation better being that I’m still a beginner.

I’ve equipped my Metro M0 Express with a Adafruit WINC1500 WiFi Shield with a PCB antenna to connect to the internet using WiFi.

Later down the line, I plan on developing an app that monitors Metro M0 output data and also send that data to Adafruit IO. For now, I’ll focus on getting the Metro to connect to WiFi.

Stay tuned to see what happens next!

Comments Off on Very First Hands On a Metro M0 Express