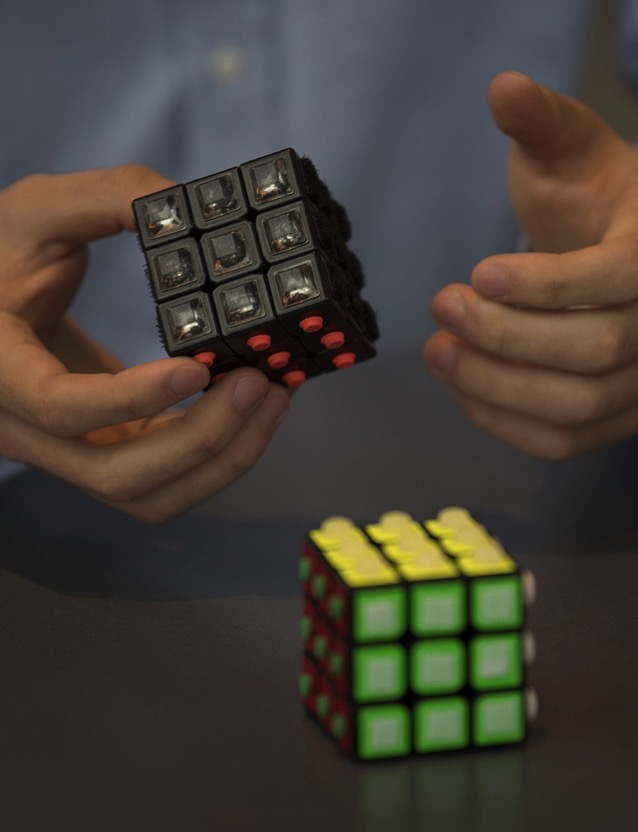 Sasha Thomas’ family has textured dots and stickers around the house to help identify various appliances, railings and other items by touch.

His father placed them in their home as a way to learn how to help his clients at the Vancouver Veteran Affairs campus, where he works as a rehab outpatient specialist for the blind.

Thomas, 18, and his friend Carson Mowrer, 17, are both big fans of Rubik’s Cube, and they had been talking for more than a year about ways to bring the puzzle to people with visual impairments. They decided to borrow some textured items from Thomas’ father and attach them to a Rubik’s Cube.

“We wanted to share our hobby with people who couldn’t play before,” said Mowrer, a senior at Skyview High School.

The two bought a generic cube puzzle, since it was looser and would slide easier. They then placed different textured items on each side. One side was left smooth and the other had plastic squares. Another side had scratchy Velcro, and the opposite had soft Velcro. The final two sides had squishy craft dots and hard plastic dots. Mowrer said the textures are paired because it’s important for players to know what is on the opposite side of the cube.

They cold-called the Washington State School for the Blind, located in Vancouver, and asked if they could bring in their cube to see how students reacted to it. They visited the school twice during the fall, teaching about six students how to use it.

The students seemed excited by it, said Thomas, a senior at Vancouver iTech Preparatory, adding that he and Mowrer had to be patient.

They talked students through the puzzle and the goal of solving it.

They tested the cube two ways. The first time, they placed the textures directly on the original colored sides. The second time, they blacked out all the colors before adding the textures. Some partially sighted students said they preferred to have the colors showing to help them solve it.

Sean McCormick, director of on-campus programs, said it was clear how genuine Thomas and Mowrer were in their cube project, making sure each side felt distinctive while also having a paired side across from it. His students having access to something they normally couldn’t use was huge for them, he said, as was interacting with peers who were passionate about the puzzle.