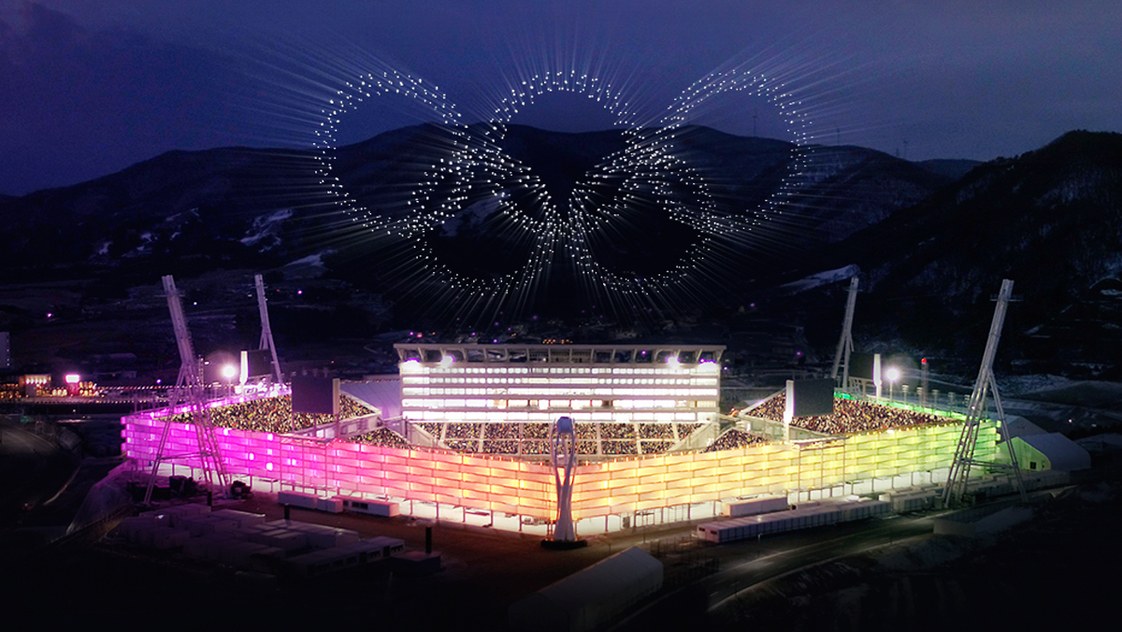 Over 1000 Intel drones came together to form the five Olympic rings in the sky at the 2018 Olympics opening ceremony in PyeongChang on Friday, Via Wired

The opening ceremony of any Olympics provides pageantry at a global scale, a celebration that, at its best, can create moments every bit as indelible as the games themselves. For the Pyeongchang Games, those watching the curtain-raiser at home also witnessed a sight never seen before: a record-setting 1,218 drones joined in a mechanical murmuration.

Drone shows like the one on display at the Pyeongchang Games have taken place before; you may remember the drone army that flanked Lady Gaga at last year’s Super Bowl. But the burst of drones that filled the sky Friday night—or early morning, depending on where in the world you watched—comprised four times as many fliers. Without hyperbole, there’s really never been anything like it.

As at the Super Bowl, the Pyeongchang drone show comes compliments of Intel’s Shooting Star platform, which enables a legion of foot-long, eight ounce, plastic and foam quadcopters to fly in sync, swooping and swirling along an animator’s prescribed path.

Intel’s Shooting Star drones are about a foot-long, weigh eight ounces, and can fly in formation for up to 20 minutes.|||

Also like the Super Bowl, the opening ceremony production you’ll see on your TV—or streaming device—was prerecorded. That’s less of a cheat than an insurance policy; tiny drones can only handle so much abuse, and Pyeongchang is a cold and windy city.

Intel had planned to produce a live version of the show for the Pyeongchang opening ceremony crowd, but had to scrap it at the last minute due to what the company describes as “impromptu logistical changes.” Television audiences, though, were always only going to see the prerecorded version of the record-setting aerial spectacle. And the Intel plans to lean into live shows throughout the week, with a separate, 300-drone act expected to take off nightly for the medal ceremonies.

Comments Off on Inside the Olympics Opening Ceremony World-Record Drone Show!