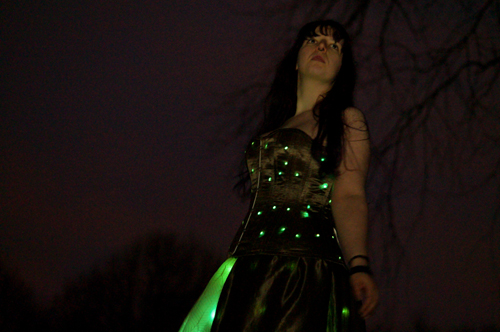 Imagine roving the hills in a dress that looks like a cloud of fireflies. Bethany of Lady Lillith Corsetry was definitely thinking of glowing bugs for the insect themed competition by Foundations Revealed. She has been creating corsets and costumes for quite some time, but decided to stretch her wings with some more LED tech, with the help of James from Collingwood’s Contraptions. Bethany wanted the LEDs to react to movement of the dress while walking, so a circuit board was created with an Arduino Nano and a BNO055 sensor. 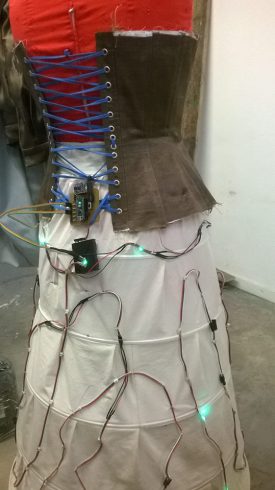 Once the LED positions were known, Bethany and James created programming that would show lights flickering in the opposite direction of the movement. Like many wearable tech creations, the wires on the hoopskirt look messy, but underneath layers of Dupion, cotton and organza they disappear. The finished dress looks beautiful by day, but especially enchanting by night.

In her final thoughts on her blog, Bethany admits there could be some improvements.

If I was to make this again I would definitely make sure the LED’s were secure before working with them as my biggest bugbear was having to constantly fix broken connections. I would also see if there was a way to decrease the bumpiness that the LED’s create in the corset.

I was thinking of ways to address these issues, so as for the broken connections, it may depend on the LED strands that were purchased. Some offer more protection with coating on the wires like NeoPixel Dot Strands. It can also help to provide strain relief by allowing for a bit of coil in the wire as LEDs are stitched in place. As far as the bumpiness in the corset, that is tricky because you either have to decide to use conductive thread and spend a lot of time stitching individual LEDs or just tolerate the wiring. Also, LED sequins would be the flattest, but they can only be one color like white or green, so you have to make sure the light value works with your chosen effect.

There are always “should haves” and “could haves” for any project, but honestly this dress is amazing. You can be sure I’ll give an update about the competition in March. In the meantime, if you are looking to do a similar project, check out our guide for a Sparkle Skirt made with our Circuit Playground microcontroller. If you want things even easier, get the Circuit Playground Express, which is the updated version capable of drag and drop style MakeCode. Whether you are new to coding or an Arduino pro, there are many ways to create a successful wearables project. Oh yeah, and we are here to cheer you on, so send us pics of your work.