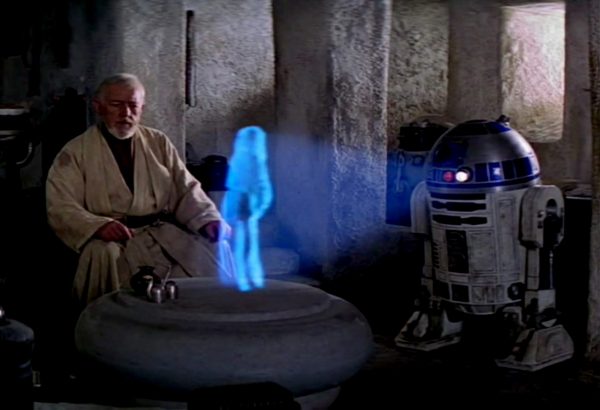 Inspired by the iconic Stars Wars scene with Princess Leia in distress, Brigham Young University engineers and physicists have created the “Princess Leia project” — a new technology for creating 3D “volumetric images” that float in the air and that you can walk all around and see from almost any angle.*

“Our group has a mission to take the 3D displays of science fiction and make them real,” said electrical and computer engineering professor and holography expert Daniel Smalley, lead author of a Jan. 25 Nature paper on the discovery. 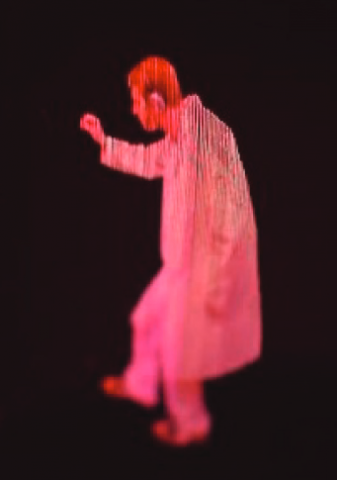 The image of Princess Leia portrayed in the movie is actually not a hologram, he explains. A holographic display scatters light only on a 2D surface. So you have to be looking at a limited range of angles to see the image, which is also normally static. Instead, a moving volumetric display can be seen from any angle and you can even reach your hand into it. Examples include the 3D displays Tony Stark interacts with in Ironman and the massive image-projecting table in Avatar.

The team’s free-space volumetric display technology, called “Optical Trap Display,” is based on photophoretic** optical trapping (controlled by a laser beam) of a rapidly moving particle (of a plant fiber called cellulose in this case). This technique takes advantage of human persistence of vision (at more than 10 images per second we don’t see a moving point of light, just the pattern it traces in space — the same phenomenon that makes movies and video work).

As the laser beam moves the trapped particle around, three more laser beams illuminate the particle with RGB (red-green-blue) light. The resulting fast-moving dot traces out a color image in three dimensions (you can see the vertical scan lines in one vertical slice in the Princess Leia image above) — producing a full-color, volumetric (3D) still image in air with 10-micrometer resolution, which allows for fine detail. The technology also features low noticeable speckle (the annoying specks seen in holograms).

Comments Off on The Princess Leia project: ‘volumetric’ 3D images that float in ‘thin air’