Hey there! This is the second week of our Distributor Spotlight series, where every week we highlight a different Adafruit distributor on the Adafruit blog. This week we bring to you Mouser Electronics, one of our top distributors in the U.S as well as one of the biggest.

Check out the photo of their enormous Distribution center in Texas! 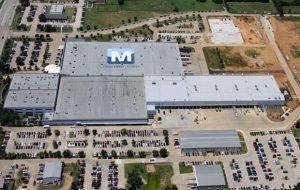 A little history on Mouser Electronics:

What began as a small high school electronics program by Physics teacher, Jerry Mouser, in 1964 in El Cajon, California has grown to become what Mouser Electronics is today. This start-up, originally called Western Components, laid the groundwork from which Mouser Electronics was formed in 1973, the same year Glenn Smith joined the company and began his career with Mouser.

Ten years later, in 1983, Mouser Electronics moved its headquarters and distribution center to Mansfield, Texas. The move placed Mouser in the middle of a growing high-tech industry in the Dallas/Fort Worth Metroplex. Being only 30 minutes from the DFW International Airport gave Mouser an important distribution advantage for serving North America and extending its reach worldwide.

In January 2000, Mouser’s success caught the attention of TTI, Inc., the world’s leading authorized distributor specialist offering passive, connector, electromechanical and discrete components. Mouser became a TTI subsidiary and together, the two offer the ideal distribution solution for design engineers and production buyers in the electronics manufacturing industry. With Mouser’s focus on new designs combined with TTI’s expertise in volume distribution, the two companies provide the complete answer from the design chain to the supply chain™.

The success of the Mouser/TTI partnership caused Warren Buffett, Berkshire Hathaway’s Chairman of the Board, to take notice of the two companies. In March 2007, the acquisition by Berkshire Hathaway Inc. was finalized positioning TTI and Mouser for the long-term. Both companies gained the added recognition and financial strength from one of the most successful companies in the world. Today, Mouser continues to grow globally focusing on providing the widest selection of the newest products that gets innovative designs to market faster and easier.