Today we are celebrating best-selling science fiction and fantasy author N.K. Jemisin,  the first black person and the first woman of color to be awarded the Hugo award for best novel. 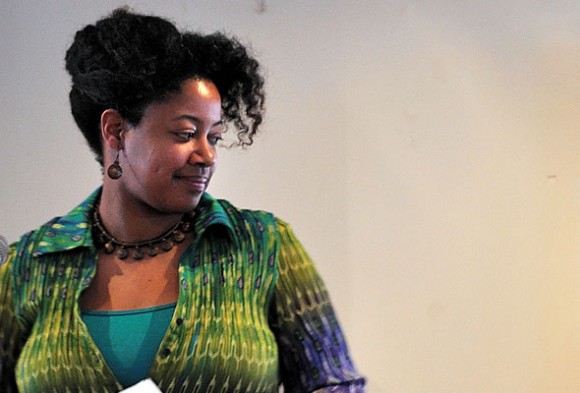 It’s human nature that we come in our own flavours,” fantasy author NK Jemisin tells the Guardian, “and it doesn’t make any sense to write a monochromatic or monocultural story, unless you’re doing something extremely small – a locked room-style story. But very few fantasy worlds ever do that. In fact, epic fantasy should not do that.”

Jemisin is on the phone from her not-very-epic day job as a university administrator in New York. When she gets off the phone, she says, she’s going to bike to a coffee shop to write her thousand words for the day, a pace that allows her to finish about a novel a year.

Her novels are anything but monochromatic. The first, titled The Killing Moon, is set in a multicultural sort-of alternate Egypt, where a patriarchal monarchy committed to order and peace, and a semi-egalitarian oligarchy, vie for power in a complicated web of shifting alliances and dreams. That story got her an agent, but didn’t sell initially – because, Jemisin says, “a fantasy novel set in something other than medieval Europe featuring an almost entirely black cast, is considered risky”.

Jemisin was undeterred. In 2010 she published her first novel, The Hundred Thousand Kingdoms, a sweeping story about a wide-ranging, heterogenous empire whose ruling family has enslaved the gods – at least for the moment. It was nominated for most of the major laurels in the industry: a Hugo, a Nebula and a World fantasy award.