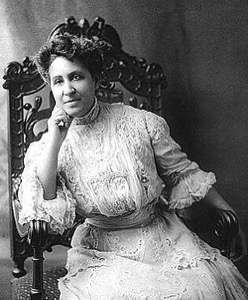 Today we celebrate the life and work of Mary Church Terrell. Via Wikipedia:

Mary Church Terrell (September 23, 1863 – July 24, 1954) was one of the first African-American women to earn a college degree, and became known as a national activist for civil rights and suffrage; in 1909 she was a founding member of the National Association for the Advancement of Colored People. She taught and was a principal at an academic high school in Washington, DC; in 1896 she was the first African-American woman in the United States to be appointed to a school board of a major city, serving in the District of Columbia until 1906. Terrell led several important associations, including the National Association of Colored Women.

Historians have generally emphasized Terrell’s role as an activist and community leader during the Progressive Era. She also had a prosperous career as a journalist (she identified as a writer). Using the pen name “Euphemia Kirk,” she published in both the black and white press to promote the African American Women’s Club Movement (Terrell, 1940).