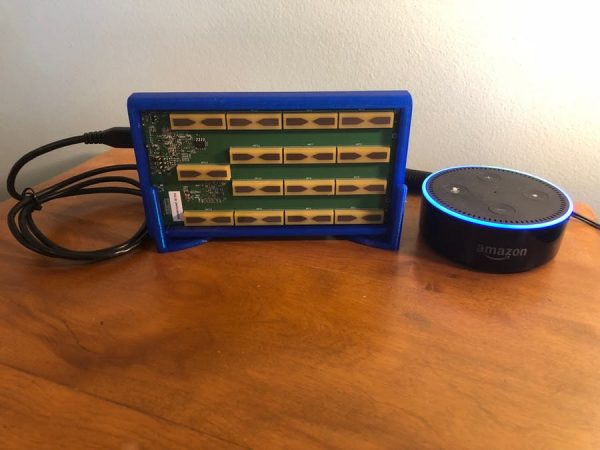 by Scott Mendenhall via hackster.io

Battleship sails into the modern world of electronic games through player interaction with the Amazon Echo and Walabot 3D imagining sensor.

Battleship is the classic board game you play to kill time and dominate your friends through naval tactical superiority. But, if we’re being honest, calling out “B4” and placing a red or white marker in your command center can be a bit boring especially if you’re trying to find the pesky patrol boat. When I saw the impeccable combination of the Amazon Echo and Walabot, I thought there couldn’t be a better way to creatively splash some fun back into the game with the innovation of two amazing technologies.

This project is intended to develop the connection between Walabot’s sensing capabilities and Amazon Alexa’s interaction for home entertainment.

Any room can become a virtual naval war zone by simply saying, “Alexa play battleship.” Upon receiving the command, the software creates a turn-based battleship game where you are a ship Captain evading and firing rounds at an unseen enemy.

The Walabot is mounted on a stand facing the center of any room. When the Walabot is powered on, it captures the environment. To start a game, the room is split into compass rose sectors – North, South, East, and West. When the user steps into a compass sector with instructions from Alexa, the Walabot tracks their location. The player can take his turn by standing in, or moving around, his room to try and dodge an enemy attack. He can also say an enemy sector to attack.

Comments Off on Battleship with Raspberry Pi @Raspberry_Pi #PiDay #RaspberryPi