Get Ready For The Acoustic Tractor Beam

The famous tractor beam of Star Trek seems like science fiction, but the fact is it may be closer to reality than you think. Researchers at the University of Bristol have actually created an acoustic tractor beam that’s able to hold objects in the air (see the video below).

The interesting part here is that the “beam” uses two 40kHz sound vortices that swirl against one another. This enables it to hold an object far larger than anything else to date. Of course, that object isn’t all that large or weighty to begin with, since it’s only a small styrofoam ball, but a real tractor beam has to start somewhere. 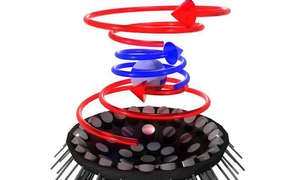 According to a writeup at Physics.org, “Researchers previously thought that acoustic tractor beams were fundamentally limited to levitating small objects as all the previous attempts to trap particles larger than the wavelength had been unstable, with objects spinning uncontrollably. This is because rotating sound field transfers some of its spinning motion to the objects causing them to orbit faster and faster until they are ejected.

The new approach, published in Physical Review Letters today, uses rapidly fluctuating acoustic vortices, which are similar to tornadoes of sound, made of a twister-like structure with loud sound surrounding a silent core.”

Comments Off on Get Ready For The Acoustic Tractor Beam