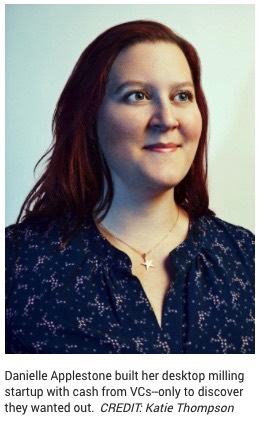 She Could Have Been One of Tesla’s Early Employees. She’s Revolutionizing Manufacturing Instead. | Inc.com.

Of all the things that almost thwarted Danielle Applestone’s life’s work, she never imagined that one of them would be venture capital.

Applestone grew up in the Arkansas woods, in a house built on tree stumps. Her mom grew vegetables and chopped all the wood. Her dad, a disabled Navy veteran who has used a wheelchair since he broke his back, was into making bullets. The family was always modifying things around the house so he could use or reach them. “For me, it was like, holy crap, tools are power,” says Applestone.

But home life was rough. “There are ways to control your family with fear that don’t involve punching them,” she says. At age 8, she tried to run away. In sixth grade, a teacher referred Applestone–by then, a constant tinkerer–to a free STEM camp. At 14, she gained admission to a free STEM boarding school, and realized that science would be her ticket out.

By the time Applestone debuted the Othermill in 2013, she was a single mom who had managed to graduate from MIT and to earn a PhD in materials science. She turned down a job at Tesla, where she would have been the third employee in its battery division. Instead, she built a machine that she believed would teach Americans the skills necessary to take the two million manufacturing jobs projected to go unfilled over the next decade.