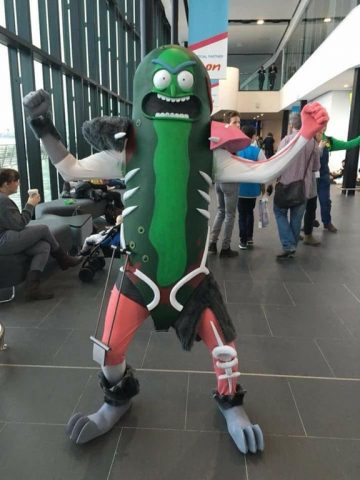 You don’t have to be a scientist to turn yourself into a pickle. Redditor CravendaleBeast knows the dill because they made a costume inspired by the already infamous Rick and Morty episode that sees Rick become a preserved cucumber. They didn’t brine about the crafting process; they just built the costume very quickly. They explain:

…it was all cut from an EVA foam sheet from polyprops with a template made for the dome and velcro running up the back behind the spine. Most of the rest was foam too, except for the brain which was bought on Ebay, and the leg brace was pvc pipe and wooden dowels. I was in a rush to complete and as such there where no fans so it got super hot, but I’m going to install some for the next outing in it as well as finishing off the laser/battery belt.

Comments Off on Pickle Rick Preserved in EVA Foam