Today we celebrate Ursula K Le Guin, a widely read and revered author of science fiction, who died earlier this year at the age of 88. We posted previously about her life and legacy on our blog here. Feminist, writer, champion of the often overlooked genres of Sci-Fi and Fantasy – Le Guin was a singular thinker and a bright inspiration to many. 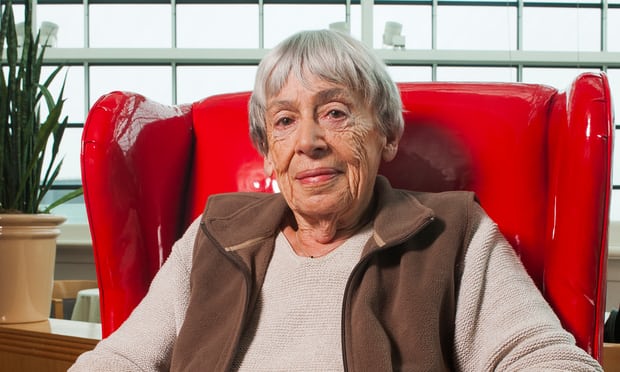 Le Guin published the first novel in her Earthsea sequence, which traced the life of the wizard Ged, in 1968. The Left Hand of Darkness, a science fiction novel set on a planet where inhabitants only assume the attributes of a gender in order to reproduce, would follow the next year, with the 1970s seeing her release a sequence of pioneering science fiction novels including The Dispossessed and The Lathe of Heaven. The third novel in the Earthsea cycle, The Farthest Shore, won her the National Book Award in children’s literature, while The Left Hand of Darkness and The Dispossessed won her both the Hugo and the Nebula prizes.

The author of more than 50 books, spanning poetry, criticism, short stories and a translation of the Tao Te Ching, Le Guin went on to be named winner of the World Fantasy award for lifetime achievement, and was made a “grand master” of the Science Fiction and Fantasy Writers of America. Her honours extended beyond genre: in 2014, she was awarded the National Book Foundation’s Medal for Distinguished Contribution to American Letters, cited for how over “more than 40 years, [she] has defied conventions of narrative, language, character, and genre, as well as transcended the boundaries between fantasy and realism, to forge new paths for literary fiction”. On receiving the medal, she said she would share it with her fellow science fiction and fantasy authors, “the writers who were excluded from literature for so long … who for the last 50 years watched the beautiful rewards go to the so-called realists”.