Why Does The Oboe Tune The Orchestra? #MusicMonday 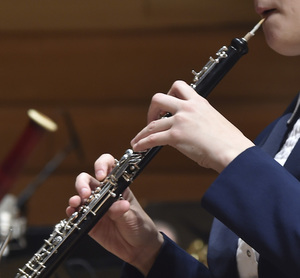 Back in the days before inexpensive guitar tuners, the players in the band would look to the keyboard player to give them the tuning notes they needed. Wow, that seems like the time before the wheel was invented or fire was discovered looking back on it now. You can now buy a great tuner for around 10 bucks that works better than anything available even 10 years ago. With that being said, I had always assumed that the orchestra tuned to the piano as well, but have recently discovered that it’s usually the oboe that all the players will pitch to. Why? Good question.

Theories abound because no one really knows for sure. Here are some of the better ones.

The Stable Tone Theory. Some believe that it makes sense to use the oboe as a pitch reference because its tone is so stable. Just as many disagree, stating that it really isn’t that stable at all and the other musicians have to adjust for the fact that the tuning changes with temperature (it goes sharp as the air gets warmer). Yet others point out that there are other instruments that might be more stable, like the glockenspiel, so why isn’t that used? The Rockford Symphony Orchestra website also busts that myth. “…every oboist uses a little electronic meter to ensure that their ‘A’ is exactly right.” So much for that one.

The Penetrating Tone Theory. Because its sound is so piercing, that makes it perfect to use as a reference tone. Maybe so, but isn’t a trumpet or piccolo even more noticeable?

It’s Tradition. The Rockford Symphony website states, “Circumstances of history, mostly, but also acoustics. The first orchestras (in the late 1600s) were mainly string instruments. A pair of oboes was sometimes used to strengthen the first and second violin parts. Soon composers were writing separate parts for the oboe, exploiting its singing tone as a contrast to the violins. The bright, rather penetrating sound of the oboe was easy to hear, and its pitch was more stable than gut strings, so it was natural to rely on it for tuning.”

Comments Off on Why Does The Oboe Tune The Orchestra? #MusicMonday