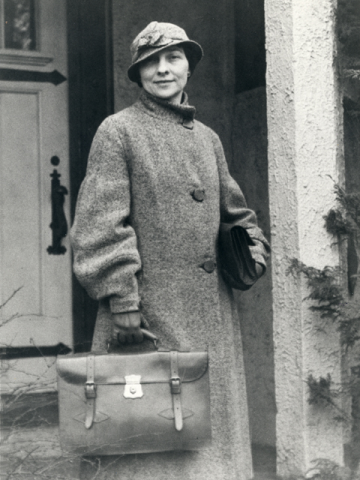 Elizebeth Smith Friedman–wife, mother, writer, Shakespeare enthusiast, cryptanalyst, and pioneer in U.S. cryptology–died on 31 October 1980 in Plainfield, New Jersey, at the age of 88. Although she is often referred to as the wife of William Friedman, she enjoyed many successes in cryptology in her own right and has been dubbed “America’s first female cryptanalyst.” In fact, although her husband is credited with numerous contributions to cryptology, it was Mrs. Friedman who introduced him to the field.
Born in 1892 to John M. Smith–a Quaker dairyman, banker, and politician–and Sopha Strock Smith, Mrs. Friedman was the youngest of nine children. The special spelling of her name is attributed to her mother, who held a strong passion against Elizebeth ever being called “Eliza.” Elizebeth was energetic, impatient, and at best strongly opinionated, with a disdain for stupidity. She is known to have been a hairdresser, seamstress, and fashion consultant whose talents were often exploited by her friends.

After briefly attending Wooster College in Ohio, she graduated from Hillsdale College in Michigan with a major in English literature. Having exhibited her interest in languages, she had also studied Latin, Greek, and German, and minored “in a great many other things.” Only she and one other sibling were privileged to attend college.

Prior to her employment with the Newberry Research Library in Chicago, she was a high school principal for at least a year. A great Shakespeare enthusiast, she was probably attracted to Newberry because of an “original Shakespeare folio” known to be there. In 1916, while working at Newberry, she was recruited by George Fabyan to work on his 500-acre estate at Riverbank, his private “think tank.”

The librarian who interviewed Mrs. Friedman on her first day is credited with having made a phone call to Colonel Fabyan that would change the then Miss Smith’s life forever.

The librarian conveyed in her telephone conversation Smith’s love for Shakespeare, among other things. Colonel Fabyan, a wealthy textile merchant, soon met Miss Smith, and they discussed what life would be like at Riverbank, Fabyan’s great estate located in Geneva, Illinois. He told Miss Smith she would assist a Boston woman, Elizabeth Wells Gallup, and her sister with Gallup’s attempt to prove that Sir Francis Bacon had authored Shakespeare’s plays and sonnets using a cipher that was supposed to have been contained within.

At Riverbank Miss Smith joined a versatile and distinguished staff. There were typists, translators, a graduate student in genetics, and professionals specializing in acoustics, engineering. Riverbank was one of the first such facilities to promote cryptology and other subjects. Through the work of the Friedmans, much historical information on secret writing was gathered. Up until the creation of the Army’s Cipher Bureau, Riverbank was the only facility capable of exploiting and solving enciphered messages.

Counted among the staff of fifteen at Riverbank was the man Miss Smith would marry in May 1917, William Friedman. The newlyweds worked together for the next four years or so in the only cryptologic laboratory in the country at the time. In 1921 Mr. and Mrs. Friedman moved to Washington, DC, to work for the War Department.

Mrs. Friedman’s employment as a cryptanalyst for the U.S. Navy followed in 1923, which led to her subsequent positions with the U.S. Treasury Department’s Bureau of Prohibition and Bureau of Customs. The net result of her career is quite significant and embraces cryptology against international smuggling and drug running in various parts of the world. The smugglers and runners resorted to radio and encoded messages to conduct their operations, presumably with a great sense of security. This, however, became a mistaken notion after Mrs. Friedman came to Washington. A more detailed account of her cryptologic contributions has been presented in a previous Almanac article.

During the post-World War Two period, Mrs. Friedman became a consultant to and created communications security systems for the International Monetary Fund.

Longtime Shakespeare enthusiasts, Mrs. Friedman and her husband, after retirement from government service, collaborated on a book entitled “The Shakespearean Ciphers Examined.” It won awards from the Folger Shakespeare Library and the American Shakespeare Theater and Academy. In this book, the Friedmans dismissed Baconians such as Mrs. Gallup and Ignatius Connelly with such technical proficiency and finesse that the book won far more acclaim than others addressing the same topic. The work that Gallup had done earlier operated on two assumptions. One was that Bacon invented a biliteral cipher and that the cipher used in the original printed Shakespeare folios employed “an odd variety of typefaces.” The Friedmans, however, “in a classic demonstration of their life’s work,” buried a hidden Baconian cipher on a page in their publication. It was an italicized phrase which, using the different type faces, expressed their final assessment of the controversy: “I did not write the plays. F. Bacon.” Their book is regarded as the definitive work, if not the final word, on the subject.

Following her husband’s death in 1969, Mrs. Friedman devoted much of retirement life to compiling a library and bibliography of William’s work. This “most extensive private collection of cryptologic material in the world” would finally be prepared for the George C. Marshall Research Library in Lexington, Virginia.

Elizebeth Smith Friedman, as evidenced by the life she led, was truly a legend in her own time.

“Our office doesn’t make ’em, we only break ’em,” uttered Elizebeth Smith Friedman to a representative of a code-building company who came to sell his wares and to tout their precious worth. And “break ’em” she did many times over for many years against many targets. Quite admirably, she did all this without the aid of calculators or computers and with only a basic background in mathematics. Her successes led to the conviction of many violators of the Volstead Act during Prohibition years.

While the Eighteenth Amendment of 1919 forbade the manufacture, sale, import, or export of intoxicating liquors, the Volstead Act forbade the consumption of such beverages. Prevailing conditions during those days, however, encouraged illegal activity.

Further, as radio equipment became less cumbersome, less conspicuous, and more sophisticated, it afforded the criminal element another means to circumvent the law. To avoid taxes, etc., criminals smuggled liquor and, to a lesser degree, narcotics, perfume, jewels, and even pinto beans. Related enciphered communications were passed by persistent anti-prohibitionists to protect their operations.

Anti-prohibitionists provided Mrs. Friedman and her team of cryptanalysts with innumerable opportunities to hone their cryptanalytic/codebreaking skills during her employment with the U.S. Treasury Department. She led the cryptanalytic effort against international smuggling and drug-running radio and encoded messages, which the runners began to use extensively to conduct their illegal operations. Even though early codes were very basic, their subsequent change in complexity and resistance to solution was predicated on the financial success and growth of the operation. The extent of sophistication seemed to pose no problem for Mrs. Friedman; she still mounted successful attacks against both the simple substitutions and transpositions and the more complex enciphered codes which eventually came into use. While working for the Coast Guard and the Bureau of Foreign Control during the Prohibition era, she solved over 12,000 rum-runners’ messages.

Mrs. Friedman also perceived the need for a more dedicated effort against suspected communications. By 1931 she had convinced Congress of the need to create a headquartered, seven-man cryptanalytic section for this purpose. As her cryptanalytic responsibilities began to mount, Mrs. Friedman sensed the need to teach other analysts cryptanalytic fundamentals, including deciphering techniques. This allowed her ample time to attack the more atypical new systems as they cropped up and expedited the entire process from initial analysis through to solution. It also allowed her to stay one step ahead of the smugglers.