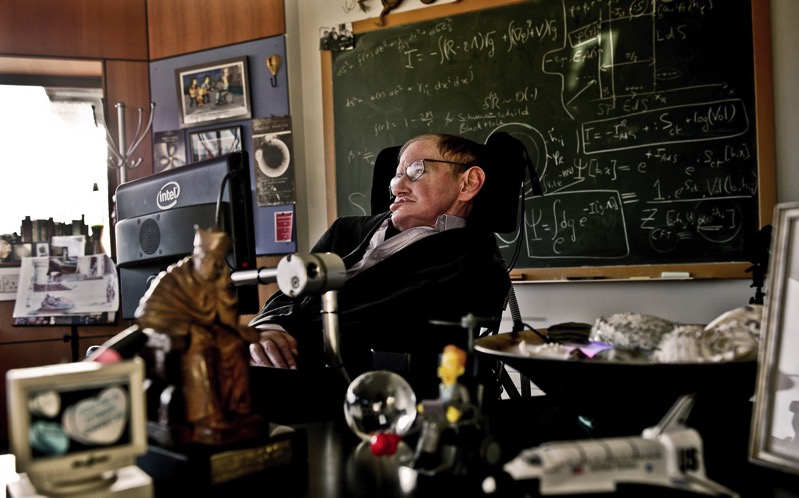 … if we do discover a complete theory, it should in time be understandable in broad principle by everyone, not just a few scientists. Then we shall all, philosophers, scientists, and just ordinary people, be able to take part in the discussion of the question of why it is that we and the universe exist.

Today the world mourns the death of renowned physicist and author Stephen Hawking. He was known not only for his great mind and thirst for life but also his humor and generosity of spirit. His impact on the science community was unquestionably far-reaching and, without a doubt, Hawking’s life and work will continue to inspire curious minds for many generations to come.

Read more about Hawking in his obituary from The New York Times.

Scientifically, Dr. Hawking will be best remembered for a discovery so strange that it might be expressed in the form of a Zen koan: When is a black hole not black? When it explodes.

What is equally amazing is that he had a career at all. As a graduate student in 1963, he learned he had amyotrophic lateral sclerosis, a neuromuscular wasting disease also known as Lou Gehrig’s disease. He was given only a few years to live.

The disease reduced his bodily control to the flexing of a finger and voluntary eye movements but left his mental faculties untouched.

He went on to become his generation’s leader in exploring gravity and the properties of black holes, the bottomless gravitational pits so deep and dense that not even light can escape them.

That work led to a turning point in modern physics, playing itself out in the closing months of 1973 on the walls of his brain when Dr. Hawking set out to apply quantum theory, the weird laws that govern subatomic reality, to black holes. In a long and daunting calculation, Dr. Hawking discovered to his befuddlement that black holes — those mythological avatars of cosmic doom — were not really black at all. In fact, he found, they would eventually fizzle, leaking radiation and particles, and finally explode and disappear over the eons.

Comments Off on Stephen Hawking Dies at 76