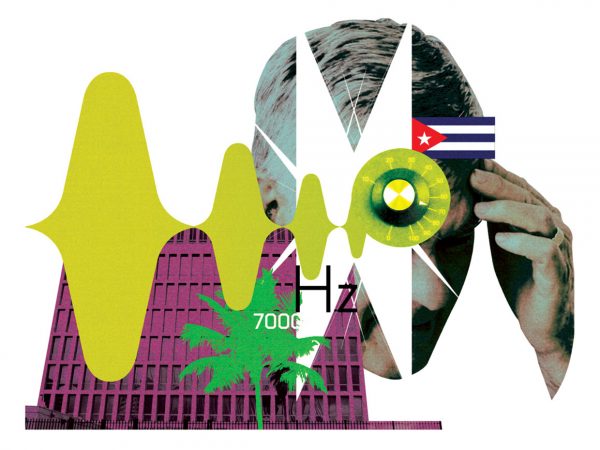 Throughout last year, mysterious ailments struck dozens of U.S. and Canadian diplomats and their families living in Cuba. Symptoms included dizziness, sleeplessness, headache, and hearing loss; many of the afflicted were in their homes or in hotel rooms when they heard intense, high-⁠pitched sounds shortly before falling ill. In February, neurologists who examined the diplomats concluded that the symptoms were consistent with concussion, but without any blunt trauma to the head. Suggested culprits included toxins, viruses, and a sonic weapon, but to date, no cause has been confirmed.

We found the last suggestion—a sonic weapon—intriguing, because around the same time that stories about health problems in Cuba began appearing, our labs, at the University of Michigan–Ann Arbor, and at Zhejiang University in China, were busy writing up our latest research on ultrasonic cybersecurity. We wondered, Could ultrasound be the culprit in Cuba?

On the face of it, it seems impossible. For one thing, ultrasonic frequencies—20 kilohertz or higher—are inaudible to humans, and yet the sounds heard by the diplomats were obviously audible. What’s more, those frequencies don’t propagate well through air and aren’t known to cause direct harm to people except under rarefied conditions. Acoustic experts dismissed the idea that ultrasound could be at fault.

Then, about six months ago, an editor from The Conversation sent us a link to a video from the Associated Press, reportedly recorded in Cuba during one of the attacks.

The editor asked us for our reaction. In the video, you can hear a piercing, metallic sound—it’s not pleasant. Watching the AP video frame by frame, we immediately noticed a few oddities. In one sequence, someone plays a sound file from one smartphone while a second smartphone records and plots the acoustic spectrum. So already the data are somewhat suspect because every microphone and every speaker introduces some distortion. Moreover, what humans hear isn’t necessarily the same as what a microphone picks up. Cleverly crafted sounds can lead to auditory illusions akin to optical illusions.

The AP video also includes a spectral plot of the recording—that’s basically a visual representation of the intensities of the various acoustic tones present, arranged by frequency. Looking closely, we noticed a spectral peak near 7 kilohertz and a dozen other less-intense tones that formed a regular pattern with peaks separated by approximately 180 hertz. What could have caused these ripples every 180 Hz? And what kind of mechanism could make an ultrasonic source produce audible sound?