This week we are showcasing the Adafruit distributor Arrow Electronics!

The new Arrow.com was launched in October of 2015 into beta mode. It has millions of products, millions of current datasheets, and thousands of reference designs to help make it easier for people to take their ideas from prototype to production.

“Arrow Electronics was founded in 1935 when a retail store named Arrow Radio opened on Cortlandt Street in the heart of lower Manhattan’s “Radio Row,” the birthplace of electronics distribution. Arrow Radio, established by Maurice (“Murray”) Goldberg, sold used radios and radio parts to retail customers. Other industry pioneers with businesses nearby were Charles Avnet and Seymour Schweber. “ 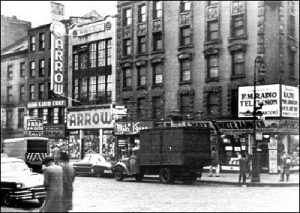 In 1980, a fire in a hotel conference center killed 13 members of Arrow’s senior management, including Glenn and Green. Waddell assumed leadership and, in 1982, recruited Stephen P. Kaufman, formerly a partner of McKinsey & Company, to join Arrow as President of the company’s Electronics Distribution Division. Kaufman succeeded Waddell as CEO in 1986 and as Chairman in 1994.

During his nearly two decades of service, Kaufman was the architect of Arrow’s bold consolidation of the U.S. electronics distribution industry as well as the company’s pioneering expansion into Europe and the Asia-Pacific region. Under Kaufman’s leadership, Arrow reshaped the landscape of worldwide electronics distribution, completing over 50 acquisitions of electronics distributors, including such prominent names as Ducommun (Kierulff), Lex (Schweber), Zeus, Anthem, Bell, and Wyle (all in the U.S.), Spoerle (Germany), Silverstar (Italy), and CAL (Hong Kong and China). Kaufman also led the company into the national distribution of commercial computer products, initially through its acquisition of Gates/FA Distributing. Arrow entered the 21st century with global sales of $9 billion—$6 billion of electronic components and $3 billion of computer products.

Comments Off on Distributor Spotlight @ArrowGlobal