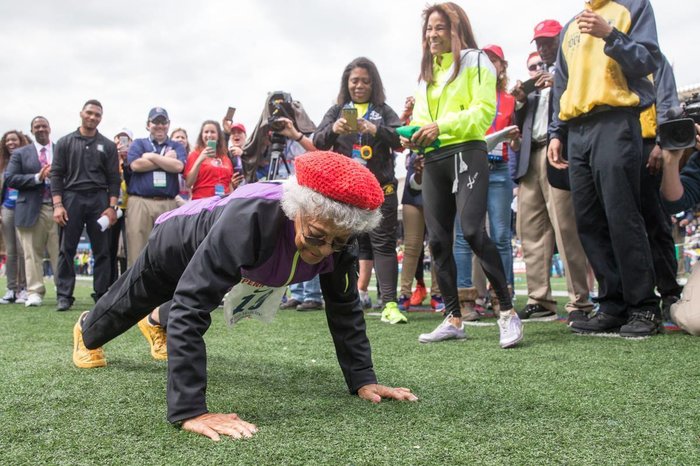 Harlemite Ida Keeling is now 102 years old and began running at the age of 67, Via NPR

At 100 years old, Ida Keeling set a new world record for the 100-meter dash on Saturday at Penn Relays in Philadelphia.

She completed the race against competitors 80 and up in 1 minute and 17.33 seconds — the fastest time recorded for a centenarian. (For comparison’s sake, Jamaican sprinter Usain Bolt holds the 100-meter world record of 9.58 seconds.)

In case you weren’t already feeling inadequate enough, here’s the advice Keeling offered after her event, speaking with NBC’s Carolyn Manno: “Eat for nutrition, not for taste. And exercise at least once a day.”

Keeling told Runners World that she was “very happy” to show the crowd “a nice example of what you can do for yourself.” Runners World adds:

“Ida Keeling smiled and celebrated by performing five pushups on the infield after Saturday’s race, though she may not have been able to hear all the cheering from the 34,000 in attendance. Her daughter had taken out one of her hearing aids to prevent Ida from becoming distracted by the noise.”
In April, The New York Times ran a profile of Keeling, who the newspaper says is “4-foot-6 and weighs 83 pounds.” Keeling told the Times she learned resilience living through the Great Depression.

“It taught you to do what you had to do without anyone doing it for you,” she said.

She was an active demonstrator during the civil rights movement, all while a widowed mother of four, the Times reports. Decades ago, two of her sons died in unsolved killings that were suspected to be drug-related, the paper says.

“Running became her therapy,” Ohio’s Beacon Journal reported in 2014. At 67, she leaped into competitive racing — and she hasn’t stopped since.