The Art of Kirigami and Bandages 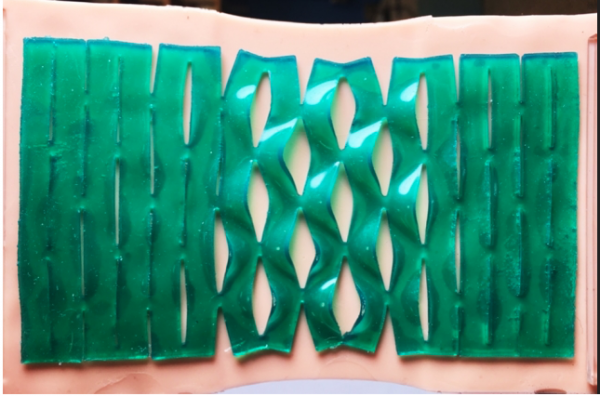 Now MIT engineers have come up with a stickier solution, in the form of a thin, lightweight, rubber-like film. The adhesive film can stick to highly deformable regions of the body, such as the knee and elbow, and maintain its hold even after 100 bending cycles. The key to the film’s clinginess is a pattern of slits that the researchers have cut into the film, similar to the cuts made in a paper-folding art form known as kirigami.
The researchers attached the “kirigami film” to a volunteer’s knee and found that each time she bent her knee, the film’s slits opened at the center, in the region of the knee with the most pronounced bending, while the slits at the edges remained closed, allowing the film to remain bonded to the skin. The kirigami cuts give the film not only stretch, but also better grip: The cuts that open release tension that would otherwise cause the entire film to peel away from the skin.
To demonstrate potential applications, the group fabricated a kirigami-patterned adhesive bandage, as well as a heat pad consisting of a kirigami film threaded with heating wires. With the application of a 3-volt power supply, the pad maintains a steady temperature of 100 degrees Fahrenheit. The group has also engineered a wearable electronic film outfitted with light-emitting diodes. All three films can function and stick to the skin, even after 100 knee bends.

Comments Off on The Art of Kirigami and Bandages