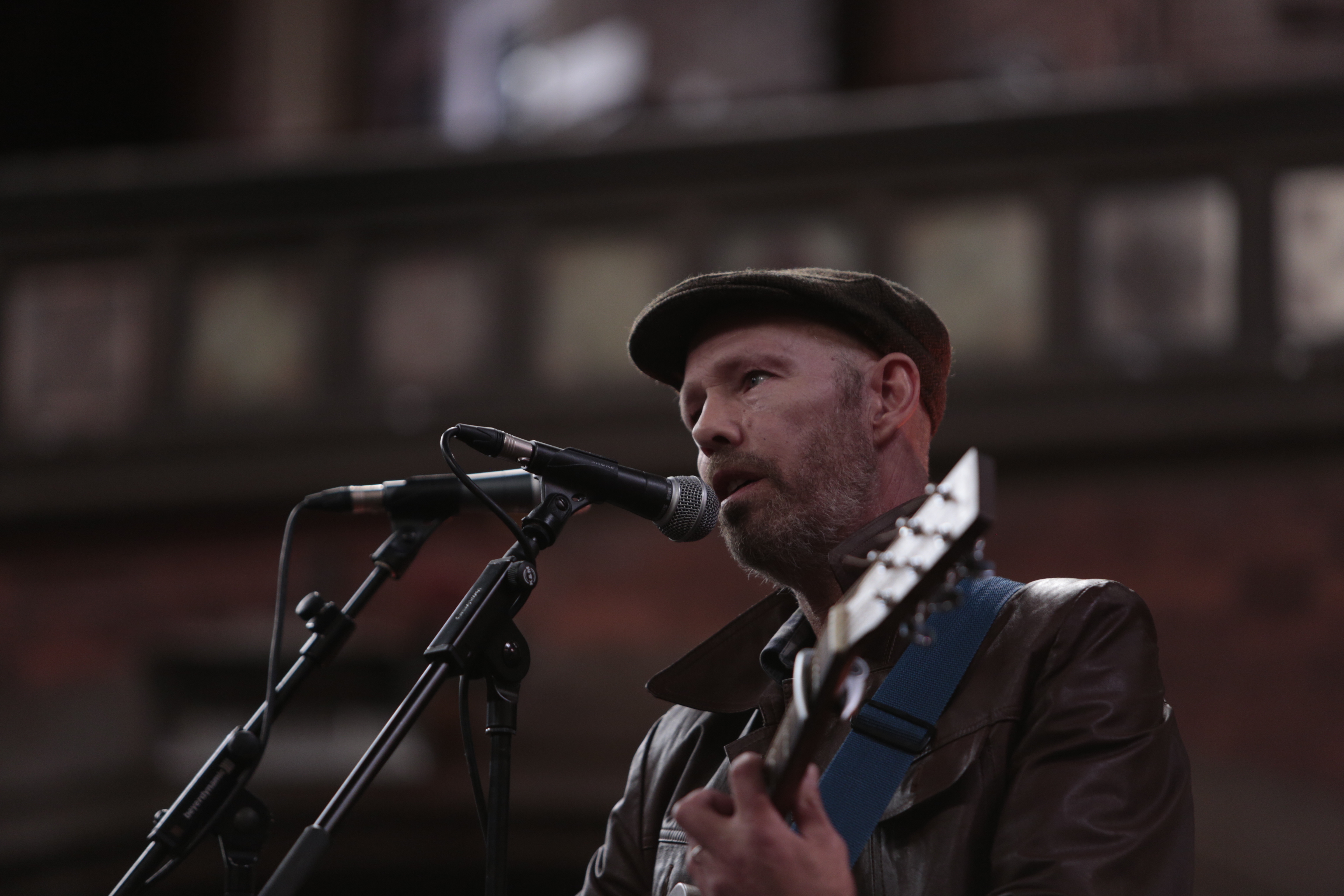 Jack Hayter is best known for his time as the multi-instrumentalist extraordinaire of Hefner, a popular London four-piece who, between 1998 and 2001, had a number of charting singles, played all over the world and became a firm favorite of legendary BBC DJ John Peel. But even before that, Hayter was offering the weird and the wonderful to the world, regardless of whether it was listening. Pre-Hefner, he played with the brilliantly menacing Alt Country band Spongefinger (referred to in multiple reviews as “Dennis Hopper’s house band,” suggesting that Blue Velvet was still very much on people’s minds in the early 1990s) and contributed pedal steel guitar to an EP from underrated experimental indie group Rhatigan.

Following the festival sets, the big singles and the BBC sessions, Hefner went quiet after their electronics inspired Dead Media album. Hayter swiftly issued his debut solo album Practical Wireless in 2002 on Absolutely Kosher Records (home at one time to Xiu Xiu, Mountain Goats, Withered Hand and others). He would continue to release frazzled and burnt-out eclectic folk music through a variety of labels, offering EPs, singles and compilation appearances, while still finding opportunities to collaborate on Oliver Cherer’s Dollboy project and continuing to collaborate on albums from Hefner alumni Darren Hayman and Antony Harding.

The past couple of years have seen a huge upswing in Hayter’s activity, in addition to continuing to collaborate with a plethora of artists, Hayter issued two albums last year, one a conceptual seventy-seven minute piece about lighthouses and the other a lo-fi R&B collection as a member of the FXU2 trio. Two works of such stylistic difference produced so close together give an accurate portrayal of Hayter as an experimental and versatile artist.

In March 2018, Hayter issued his first full length album since 2002. Abbey Wood is arguably his best and most ambitious solo work yet. Ramshackle and inspired, it’s a dour mix of regional history, broken people and tragic tales. Even at the height of Hayter’s commercial success, his music was not for everyone, but his heart is huge, his creativity is indisputable and his voice is entirely his own.

Hayter has a reputation for being able to turn almost anything into a microphone and anywhere into a temporary recording studio. The miracle of Hayter’s music sometimes is not how good the recording sounds but that it was made at all. It’s a powerful mix of determination and improvisation. Whether he’s on the big stages or small, he offers something special and any music makers out there can take inspiration from Hayter. His records usually don’t sound like other people’s records but they always sound like him.

He was a terrific guest for MusicMakers. He’s a treasure trove of history, DIY, gear, tech, common sense and eccentricities. An eclectic and enduring artist, there’s not many out there like Jack Hayter.

Where are you based?
I’m now based in Gravesend, England.

What was your introduction to music?
I suddenly find myself feeling elderly!  In terms of hearing music as a child, it was the ’60s songs my parents liked. They were dairy farmers, and cows like to listen to the radio while they are being milked.  Maybe Dad was one of the first to realise this, although it’s common knowledge now. The BBC Sunday Top 20 show called “Pick of the Pops” coincided with evening milking time, and from a very early age that was like religion for me …and the cows too. I used to play along on a harmonica that I got for my 5th birthday while I tried to help out.

What have you been working on?
It’s been a pretty busy year. In addition to my own stuff and the bands I’m in, I do a fair amount of pedal steel and viola playing for other people. I mostly record parts remotely in my flat. Most people I know record at home now and so it’s rare for me to set foot in an actual studio nowadays. The most recent thing was a cover version of a Cloud song and some fiddle for Ralegh Long, though I mostly play pedal steel with him.

How have you seen technology as having changed the creation and consumption of music in your lifetime?
The changes have been immense in terms of DIY music making.  I started playing around as a kid in the early ’70s with two old cassette recorders and a homemade microphone.  I was always playing with magnets, wire and paper cones and eventually made a pretty good one. I wish I still had those sound- on- sound experimental recordings I made when I was 13. I didn’t know anybody else who did this and we lived in a pretty remote place…so I actually believed I’d invented multitrack recording for about six months!  From there I went through a four-track portastudio stage in the ’80s. Then in the early ’90s I discovered a Cooledit V1 and Fruity Loops, the original version with the pattern player that looked like the Microsoft Minesweeper game.

At last I could make some pretty decent multitrack recordings via the microphone input jack of a 486 PC. Banishing cassette tape “wow” and “flutter” at a stroke was great. Now we think it’s cute and retro, but back then it was blight unless you could afford a Revox. You couldn’t apply digital effects in real time in the early software, so you had to think about reverb and compression in advance and render the individual tracks before mixing…probably a good thing in terms of learning. I still use both those programs as an adjunct to my current Reaper/Waves setup. That original ’90s Fruity Loops is so handy when you want a bit of oddness/glitchyness because of its inability to time stretch samples predictably!

The underlying mathematics of digital sound hasn’t really changed for 30 years so you can always go back in time and revisit those old friends and achieve acceptable quality.

Describe your recording or production setup:
This is pretty much everything I use now: Alesis iO2 USB interface, 32 bit Reaper(can’t go 64 bit as some of my old software only  works 32 bit), Fruity Loops v10, some old Waves DX plugins that I’ve had since 1999, a selection of bad mics, one decent mic (an old Rode NT2 that I got free for being a mystery shopper).

For monitoring: a pair of beat up second hand JBL LSR25s which I’ve had for over 10 years and a cheap TV subwoofer of an unknown make which I bought  from LIDL. Various instruments and an exquisitely uncool, as new, 1985 KAWAI K1 FM synth (yes I know…but I like a challenge) which I was given last year by a friend.

I’ve never owned a Mac. It’s always been old PCs for me because I can get under the bonnet (hood?) and make them work in the way I want. Macs are fine, but they’re a bit too divorced from the bits and bytes for me. As I said, the mathematics is the same, it’s just subtracting and adding binary numbers, so the platform shouldn’t matter, but I do like to tweak things.  I think most of my friends feel that unreliable/glitchy gear gets in the way of recording…so maybe they like Macs for that reason…they don’t give as much trouble. I like fiddling with kit though, and I like working around limitations to be part of the process. I find it odd that people happily put up with hiss from a vintage amp, but have sleepless nights wondering about “dither” and whether they’ve chosen the right valve emulation plugin. I should probably worry more about that stuff but I’m not usually aiming for a particular sound.

Any tips for gear or customising your workspace?
Do use cheap but fair monitors, that way your work will sound better when it’s played elsewhere. If you’re mixing big, a subwoofer is pretty essential. Bass is the hardest thing to get right, and I fail consistently with it.  I know one very good producer who rolls off everything below 100 Hz anyway…so there are no rules, but I’d say even a £30 TV sub is better than nothing. A bass trap helps too…easy to make…just stick an old pin board covered in foam behind the speakers.  My high-frequency hearing is pretty shot these days, so I get friends/family to check I won’t be killing dogs!

Check your mixes in the car. A car is perhaps the most anechoic acoustic space most of us have access to!

Get your own table…so meals don’t interrupt the process and the kids have somewhere they can do their homework.

Only wear headphones when you have to. They are evil. I’m paying a price for years of wearing them.

What’s one song everybody should hear?
I’m not answering that, not on your nelly!  This is a good place to start though, because it’s where the adventure began. Go where you want to go from here!

Who do you think we should ask these questions next?
That’s a hard question. I’m spoiled for choice. In terms of homebrew production genius, if you haven’t already asked Emma Winston AKA Deerful (Editor: we have!), then I suggest Oliver Cherer. Both are brilliant at what they do. 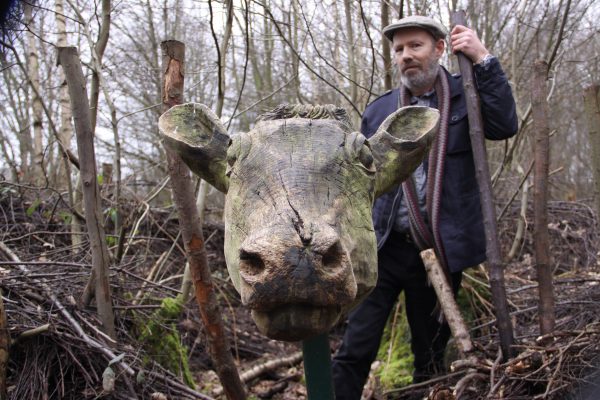 Comments Off on MusicMakers010: Jack Hayter