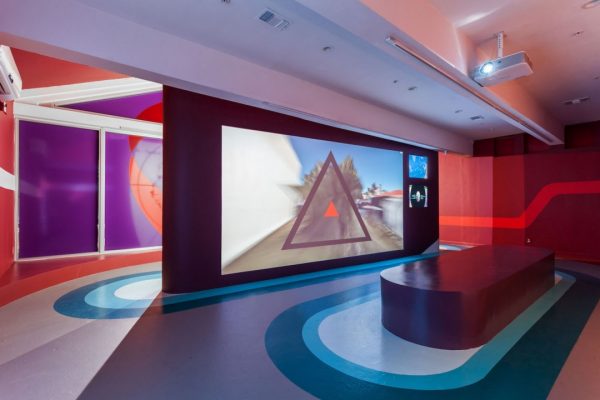 In Robert Wise’s 1971 film, The Andromeda Strain, scientists conduct research on a deadly disease at the Wildfire facility, a laboratory that extends five stories under the earth. Its corridors are stark red, the same florid color of the control panels on the space station in Andrei Tarkovsky’s Solaris (1972). The visual language of science fiction is often severe. 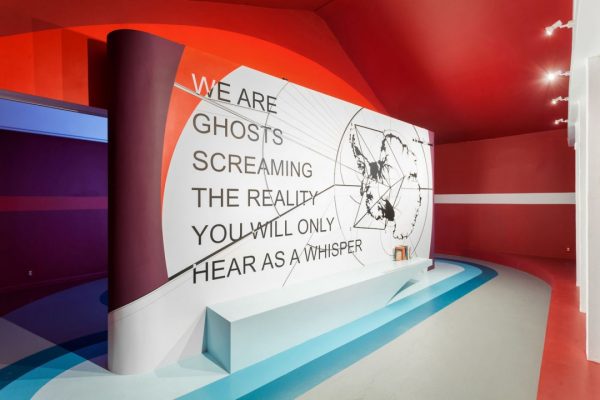 Intertidal — an exhibition by the collective Alliance of the Southern Triangle(AST) and curated by Natalia Zuluaga at Art Center/South Florida — is all but a control room of its own. The show shares with its cinematic predecessors those deep reds and maroons, the womb-like colors that recall the bloody warmth of the body and its fallibility, its vulnerability and propensity for disease. Swaths of blue-green encircle benches like topographic maps. The sound of wind echoes throughout, building into a terrible, swelling, orchestral score.

AST, a collective of artists, architects, and a curator, describes itself as “driven by the idea that Miami is an ideal case study for thinking about the matrix of the global city and climate change.” Intertidal examines how to transmit a message to the future that our world — Miami in particular — is on the verge of drowning. Here, sea-level rise is not a science fictional future: it’s a present-day reality that lends itself well to constant low-level anxiety, thinkpieces, and prognostication. A high tide on Miami Beach tide once stranded an octopus in a parking garage, as if to replace the “canary in the mine” idiom with something far stranger.