Paths to VR: From Religious Paintings to Simulated Reality 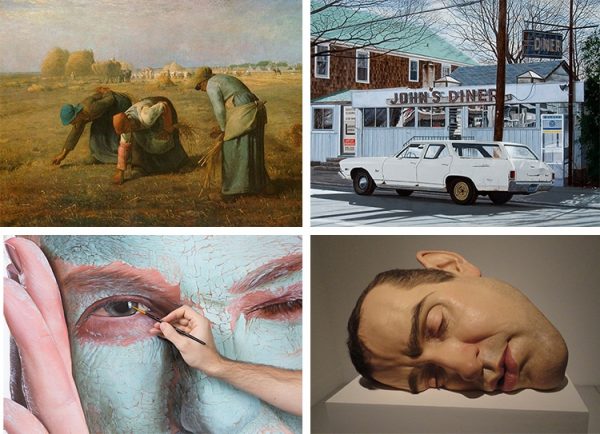 As with any artistic movement, the evolution of Hyperrealism can only be told in relation to the other influential art styles that preceded it. Hyperrealism traces its roots back through Photorealism, and Realism before that, sharing many of the same artistic traits, yet, its own distinct individual style.

The rise of Hyperrealism correlates with the development of photography. While some realists of the late 1800s felt threatened by the new medium, American photorealists of the 1960s and ‘70s sought to immortalize photographic imagery by faithfully capturing their precision and detail in paintings and realistic drawings. By the early 2000s, Hyperrealists used advancements in high-definition photography as a jumping-off point into expressions of false realities that continue to astonish and amaze art lovers all over the world.

Hyperrealism is a relatively new art movement that began in the early ‘70s. It got its name in 1973, when Belgian art dealer Isy Brachot made L’hyperréalisme. It was the title for one of his major exhibitions at his gallery in Brussels, which featured work from American Photorealists, such as Ralph Goings and Chuck Close. Building on the work of photorealists, the Hyperrealism art movement rapidly evolved in the early 2000s alongside technology. These artists were able—and continue—to achieve the illusion of sharp, high-definition photographs thanks to advancements in computers, digital imaging, and software.

Comments Off on Paths to VR: From Religious Paintings to Simulated Reality