What Ants Can Teach Us About Urban Mobility 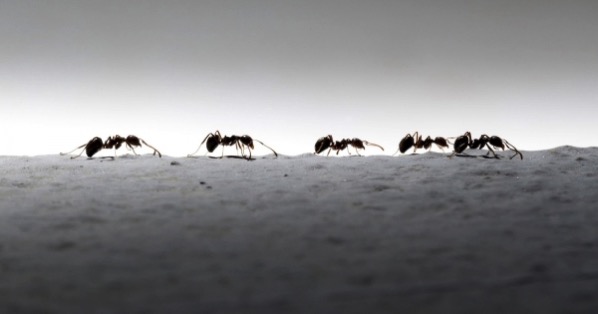 Ants are the kings of the road and handle traffic congestion much better than we do.

For a long time ants have been the maximum example of collective organization, of the natural excellence for coordination among individuals of the same species: subordination, discipline, humility and obedience of the individual whose importance is sacrificed for the good of the group.

Scientists reexamined these myths, eager to find the key to success and apply it to our own environment. One of the most interesting results was a model that could explain how ants handle traffic congestion better than humans do.

Physicist Apoorva Naga of the Indian Center for Spatial Information Technology became interested in the subject after coming across a German study showing that ants that run along a trail are capable of maintaining a stable speed even when there are too many other ants on the trail. His study joins the growing list of mathematical and physical theories aiming to explain bottlenecks in order to eradicate them from our urban daily life.

Nagar explains why ants are better in traffic:

No. 1, ants don’t have egos. They don’t show off by zooming past people.

The second thing is, they do not mind a few accidents or collisions,” says Nagar. So unless there’s a serious pileup, they just keep going.

The third reason, he says, is that ants seem to get more disciplined when paths get crowded, running in straighter lines and varying their speed less. They’re less likely to make unexpected moves in this sort of heavy traffic. It’s the kind of steady control you see when a computer, rather than a human, is controlling a car. There’s less variability unless it’s absolutely called for.

It is true that we can’t just brush off crashes and accidents, and neither can we ask humans to leave their ego behind when they get behind the wheel. But we can learn something from them, and that is that they prioritize, more than any other species, the concept of collective intelligence.

Nagar used Langevin’s equation as a mathematical model of ants’ traffic patterns and compared what the model predicted with what was shown by experiments regarding ants walking in a straight line, and “it seemed to fit well with the experiment,” Nagar said.

The point is perhaps that it would not do us any harm to sit for a primitive and cadenced meditation while watching ants move, and to eventually understand the abstract and chaotic concept of traffic from these masters of the road.

Comments Off on What Ants Can Teach Us About Urban Mobility